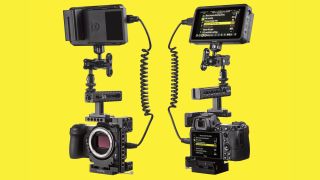 Nikon has launched RAW video output for its Nikon Z6 and Nikon Z7 mirrorless cameras, but that’s not all. Nikon’s US press room has also announced the much-anticipated support of CFexpress cards via firmware upgrade 2.20, although we’re still awaiting an official release for the UK.

The former offers Nikon Z6 and Z7 shooters the ability to output 12-bit RAW to an Atomos Ninja V – the 5.2-inch on-camera monitor and recorder that comes with the Nikon Z6 Essential Movie/Filmmakers kit. This makes the camera behemoth the only manufacturer (currently) to enable RAW video to be output directly from a full-frame mirrorless camera via HDMI.

• Read more: Why ProRes RAW is a file format you should know about

The video format used during recording is ProRes RAW, developed by Apple. The popular codec compresses RAW files to make them more manageable, while still retaining much of the data necessary when heavily manipulating footage in post.

Once the firmware has been downloaded, RAW video output support will need to be installed at Nikon service centers and will cost $199.95/£179 (plus shipping). However, if you have already purchased the Nikon Z6 Essential Filmmaker kit (or plan to do so) this service will be provided free of charge (those who have already purchased the kit will need proof of purchase).

Nikon has confirmed CFexpress card compatibility for both the Z6 and Z7, with support for the Nikon D850, D500 and D5 (XQD variant) expected in the future.

• Read more: The best memory card for your camera

Firmware 2.20 enabled the Nikon Z6 and Z7’s card slots to accept the new CFexpress Type B memory cards, which are physically very similar to the standard XQD cards. As it stands, only Sony CFexpress cards are ‘fully supported’, but according to Nikon "the number of supported cards will continue to expand as additional cards are tested and certified."