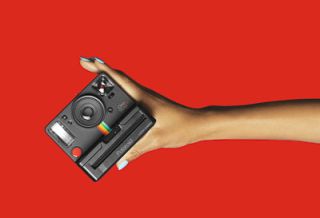 Following the success of the Polaroid OneStep 2, one of the best instant cameras that reignited the brand, Polaroid Originals has now unveiled the next phase of its journey.

Presenting the Polaroid OneStep+. A new instant camera in very much the same vein as the first, it works the same way as the Polaroid cameras of yore. Hit the button, an image prints. Nice and simple.

So what's new? Well, aside from the sleek new black paint job, the Polaroid OneStep+ complements the original camera's standard lens with an additional portrait lens, allowing for closer shooting distances as short as 30cm. Swapping between the two lenses is a simple matter of flicking the big red switch on top of the camera, next to the lights that indicate how many shots you have remaining.

The other new headline features is connectivity. The Polaroid OneStep+ can use Bluetooth to connect to the user's smartphone via the new Polaroid Originals app, allowing for remote shooting, as well as giving the user a variety of new shooting modes to play with. More on those after the jump.

The new modes available via the app are as follows:

Light Painting: A long-exposure designed for drawing shapes with a single light source.

Self-timer: A countdown of 25 seconds.

Remote Trigger: Use your phone to trigger the shot. Handy for group pictures.

Noise Trigger: A sudden, sharp noise will trigger the shot. Can be used for remote shooting with the clap of a hand, or can be used to capture quick moments like the splash of someone hitting water.

Scanner: For easy sharing. Will identify your photos and do a quick auto-edit (cropping and reducing glare) for upload to social media.

The resurgence of Polaroid instant cameras began in 2017 when The Impossible Project announced its acquisition of the Polaroid brand and its rebranding as Polaroid Originals.

As well as this new camera, the companies have also announced the establishment of new headquarters in Amsterdam, where Polaroid Originals and those from the original Polaroid company will be operating under one roof, as one company, named Polaroid BV.

This can only be good news for instant film enthusiasts – it looks like we can expect plenty more from this new team, with the instant print renaissance showing no signs of slowing.