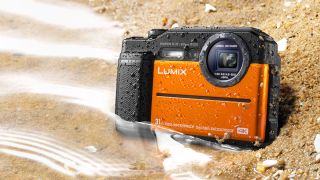 Panasonic has spent the last few months largely revamping its Lumix mirrorless line, first with the G9 and GX9, before the Japan-only GF10 and the video-focused GH5S. Now, it’s turned its attention to a completely different corner of the market, namely its waterproof FT line, an area that hasn’t seen any love since 2015’s FT6 and FT30 models.

The Lumix FT7, which also goes by the name Lumix TS7 in the US, has the honour of being the company’s flagship waterproof compact, and it upgrades a number of specs from the previous FT5/FT6 models.

The sensor now packs 20.4MP against the FT5’s 16.1MP and 4K video recording is also present on an FT model for the first time. This is joined by the familiar 4K PHOTO and Post Focus options.

Most of the camera's tough credentials have remained the same as before, such as 2m shock-proofing and IP6X dust protection, although waterproofing has increased significantly to 31m, from a previous 13m.

Another key change is the incorporation of a 0.2in EVF around the back, while the 3in LCD screen now presents images with 1.04million dots, rather than 460k dots as before.

Panasonic has also incorporated an LED on the front panel to throw a little extra light on subjects, which may be useful when capturing images underwater or when recording videos in darker conditions.

Despite its improvements over the previous FT models, it also appears to take a few step backwards. The lens, for example, is no longer a Leica-badged optic, while battery life has dropped from 370 frames on the FT5 to 300 here (when using the LCD screen). You can, however, charge the battery through the camera’s USB port, something that wasn't possible on the FT5.

While the camera packs an altimeter and compass, the FT5’s GPS system has been dropped, as has depth indicator and NFC functionality.

Other features include a minimum focusing distance of 5cm and a collection of Creative Control options such as Expressive, Cross Process and Soft Focus.

The FT7 will be available in black, orange and blue finishes, with an RRP of £399 in the UK. Pricing for other territories is yet to be revealed, but we'll update this page as soon as more information becomes available.