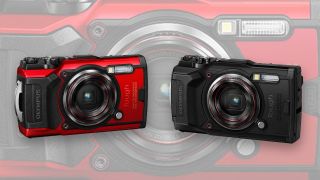 While the company is best known for its range of Micro Four Thirds bodies, Olympus'  Tough series is regarded among the highest in the industry when it comes to rugged performers, comprising some of the best waterproof cameras.

In fact, we know of one very senior executive at a rival manufacturer who actually buys Olympus Tough cameras instead of the outdoor cameras made by his own company!

The leak of the latest model, the Olympus Tough TG-6, comes courtesy of 43 Rumors. As is the norm for this product line, the updates appear to be iterative – there's nothing earth-shatteringly new here, and the specs largely seem to be carried over from the Olympus Tough TG-5.

This means that the TG-6 contains a similar (if not the same) 1/2.3-inch 12MP image sensor as its predecessor, rather than the 16MP sensor possessed by the TG-4 and earlier cameras.

The lower resolution is mitigated by the improved low light performance that produces better images not only in typical environments with limited illumination, but also when it comes to taking photographs underwater where there is inherently less light.

(Much like the Panasonic GH5S, which adopted a 10MP sensor instead of the 20MP sensor of its sister model, the lower resolution results in larger individual photosites that can gather more light, hence better low light performance.)

Could this be the ultimate camera for the summer? We eagerly await official word from Olympus so we can find out…

The best underwater and waterproof cameras
What are the best action cameras?
12 best cameras for kids