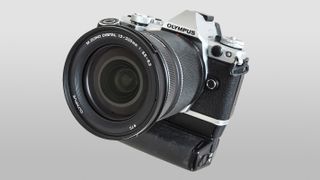 There is yet more chatter about one of the most gossip-worthy cameras on the horizon. The highly anticipated Olympus OM-D E-M5 Mark III looks set for a late summer reveal, and could be packing a 20MP sensor as well as a number of other changes to the E-M5 family.

These apparently include a new image processor, a different battery, along with a body composed of different materials in order to make it more lightweight while retaining Olympus' famed weather-proofness.

The Olympus OM-D E-M5 Mark III was originally expected to be revealed in early August, but according to a report from 43 Rumors this has been pushed back to a late September or early October unveiling.

This corresponds with Olympus' own reassurance that an E-M5 successor would be on the way soon, along with the registration of a new camera from Olympus (under the product name "IM016") that is seems almost certain to be the upcoming body.

The website's sources also concur with our speculation that the E-M5 Mark III will possess the same 20.4MP sensor as the flagship Olympus OM-D E-M1X. However, they go one step further to suggest that the sensor will retain the flagship's 121-point phase detect autofocus system (the E-M5 series has, traditionally, only used contrast-detect AF).

In addition, it reports that the camera may also benefit from a new image processor – likely to be called the TruePic XI, replacing the previous processor that debuted back in 2016.

The rumor site also stated that the Olympus OM-D E-M5 Mark III would be a much lighter camera than its predecessor, thanks to being constructed of more plastic compounds, as well as using the smaller BLS-50 battery (currently used in the Olympus OM-D E-M10 Mark III and Olympus PEN E-PL9).

These all seem like steps in the right direction for the E-M5 line, which has always positioned itself as a balance of performance and portability (compared to the flagship E-M1 series, which favored power over compactness).

While these specs might even the playing field with the APS-C rivals, the real question remains whether the price will be as competitive…