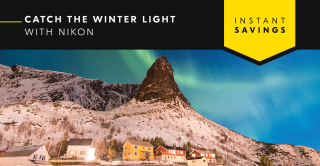 While camera manufacturers have long offered seasonal money-saving promotions, Nikon's latest deal offers a discount off the retailer's price at the point of purchase, rather than having to be redeemed as part of a 'cashback' scheme. These savings come on top of any discounts that Nikon authorised retailers might already have applied to the product.

The savings aren't just limited to camera bodies, but available on a wide range of lenses too, and not just older models: it's notable that the only-just-in-the-shops Z NIKKOR 85mm f/1.8 S sees a handsome £90 shaved off the asking price.

The promotion allows customers to gain instant savings without the need to redeem cashback following the purchase of qualifying Nikon products.

Jake Cundy, Head of Business Planning at Nikon UK says: “After the popularity of our summer instant savings promotion, we are pleased to announce a winter campaign with extensive savings across our range – including the award winning mirrorless Z Series, our entry level D3500 D-SLR and COOLPIX line-up.”

He continues: “This gives photography enthusiasts the opportunity to gain access to exclusive offers – making their money go further over a key gifting period.”

Here is the full list of the products and savings available in the promotion: