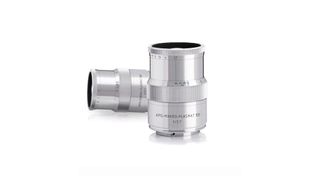 Back in 1918, Dr Paul Rudolph began work on a new type of lens with optimal correction of chromatic and spherical aberration. This would become known as the Plasmat design, and now a new lens based around this optical configuration is being resurrected by Meyer Optik.

The last lens made by Dr Rudolph was the Makro-Plasmat – a reference to 35mm, and nothing to do with macro photography – and this is being revived as the new APO-Makro-Plasmat 105mm f2.7.

The lens, which carries an aperture range of f/2.7-f/22, is constructed of six elements in five groups, and weighs 350g. Thanks to its 15-bladed diaphragm, it's said to produce distinctive bokeh in out-of-focus areas, with focus performed manually between the 1.1m minimum focusing distance and infinity.

The firm promises that it has refined Dr Rudolph’s original design to make a lens that has been optimised for modern digital cameras, and feedback from tester photographers has been positive. “I did not touch the images afterwards in post processing, it would only have ruined the picturesque looks,” said photographer Max Unuetzer.

The new APO-Makro-Plasmat 105 f2.7 will be available for Canon EF, Nikon F, Sony E, Fujifilm X and Leica M systems, while medium format versions will be available for Fujifilm GFX and Hasselblad X1D users. The Kickstarter page also has been updated to say that M42 and Pentax K mounts have been “added to the mix”.

The Kickstarter campaign has smashed through its funding goal of £35,670, almost quadrupling it at time of writing. If you pledge now you’ll be able to get your hands on a lens for a minimum price of $1,099 – and as the lens is expected to carry an RRP of $2,999, that's quite a saving.

The first shipments are expected in February 2019. Interested? Head to the Kickstarter page to find out more.