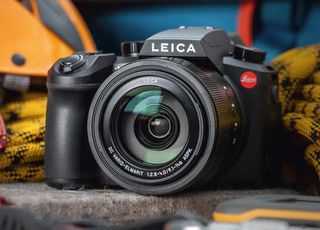 The first image has surfaced of the upcoming Leica V-Lux 5, the latest bridge camera from the luxury brand, suggesting that an announcement will be happening any time now.

The leak comes courtesy of the Japanese rumor ninjas at Nokishita, who had no further specs of information to share. However, looking at the history of the camera, we probably have a very good idea of what will be under the hood.

That's because its predecessor, the Leica V-Lux (Typ 114), was little more than a clone of the Panasonic FZ1000 – albeit with a higher price tag.

It's all part of the "unique" relationship between the two companies, which sees Panasonic bridges and compacts being rebadged and sold as Leicas, Leica-branded lenses being made by Panasonic factories, and of course the manufacturers working together as part of the full-frame mirrorless L-Mount Alliance.

So, both common sense and the leaked picture of the camera point to the Leica V-Lux 5 being a rebranded Panasonic FZ1000 II – which in turn is awkwardly similar in specs to the FZ1000 / V-Lux.

In addition to the impressive 16x optical zoom, it also features a 5-axis Hybrid Optical Image Stabilizer, burst shooting of 12 frames per second, and records 4K video up to 30 frames per second.