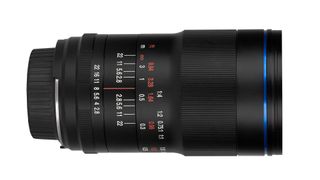 Laowa has unveiled its latest lens – a full-frame macro lens that focuses closer, and gives a higher degree of magnification than any of its rivals. The Laowa 100mm f/2.8 2:1 Ultra Macro APO provides, as its name suggests, a 2:1 magnification ratio – allowing photographers to focus in on microscopic detail.

Most macro lenses typically give 1:1, or life size magnification - but this new prime from this innovative Chinese optical manufacturer gives twice this magnification.

It will focus down to 24.7cm, but can also focus at other distances to give a full range of magnifications – and thanks to its f/2.8 maximum aperture will also prove useful as a portrait lens.

The manual focus lens will be available for Canon and Nikon DSLRs - as well as for Sony E-mount full-frame mirrorless cameras. The development of the lens was first announced back in April last year - but the full details and pricing have now been made unveiled.

The construction of the lens varies slightly depending on the  mount. The Sony version is longer than the Canon or Nikon versions. The number of diaphragm blades also varies with the mount (see table below). The Canon version of the Laowa  lens is integrated with a CPU chip and aperture motor.

In all versions of the lens, there is one apochromatic element, to help control chromatic aberration in both in-focus and out-of-focus areas.

Venus Optics, the manufacturers of the Laowa brand, tells us that the 100mm f/2.8 2:1 Ultra Macro APO lens will start shipping in May. The recommended retail price has been set at $449 in the US; the UK price has yet to be announced. A tripod collar will be available as an optional extra at a cost of $30.