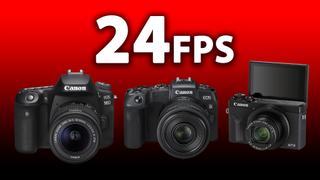 Canon has today announced a firmware upgrade that will finally imbue two of its most recent cameras, the Canon EOS RP and Canon EOS 90D, with the ability to shoot video at 24 frames per second.

Both cameras will receive the update later this month, with the Canon PowerShot G7 X Mark III and Canon PowerShot G5 X Mark II each receiving it by the end of December. Finally, the firmware for the Canon EOS M6 Mark II "will be available during 2020."

This update will address one of the most peculiar out-of-the-box video limitations of the cameras, all of which have been heavily marketed based on their video capabilities – in particular, much was made of the fact that the Canon EOS M6 Mark II and Canon EOS 90D boast uncropped 4K recording for the first time on a Canon interchangeable lens body.

It was previously possible to shoot at 25fps on these cameras (our sample footage below for the Canon EOS M6 Mark II was shot in 4K at 25fps), with users sometimes having to juggle between NTSC mode (the 60Hz video standard used in territories like North America and Japan) and PAL mode (the 50Hz standard used in the UK and Europe) to make the option available.

The new 24fps (well, 23.98fps strictly speaking) at last unlocks the frame-rate favored by most video shooters and cinephiles. In short, 24fps is widely accepted as the industry standard for cinematic footage – namely because motion pictures are captured at 24 frames with a shutter speed of 1/48 sec. For this reason, everyone from vloggers to filmmakers choose to shoot at 24fps.

It had previously been speculated that the affected cameras' inability to shoot at 24fps might be a limitation of the new Digic 8 processor. Whether it's due to the new chip, or simply a (rather massive) oversight on the part of Canon's engineers, the firmware fix will put everything right.

We'll update this story when the respective updates become available, but in the meantime you can keep an eye on the Support page of the official Canon website in your region.

What is 4K?
The best 4K camera for filmmaking in 2019, for photographers, vloggers, pros
Canon EOS 90D review