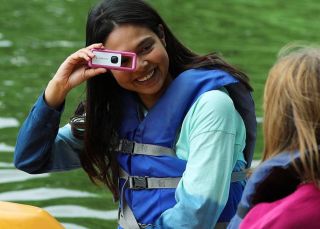 Today Canon has announced the launch of the Canon Ivy Rec, a wearable activity camera that can clip onto a belt or bag - or be easily stowed away in a small pocket. Waterproof up to 30 minutes at a depth of two meters in fresh water and shockproof up to two meters, the Ivy Rec is designed to help adventure seekers capture quality images.

Weighing an impressively light 90 grams, the Canon Ivy Rec has a 13MP sensor and records Full HD at 1080p up to 60fps videos to a microSD card. For those who like to push the limits on their adventures, the Ivy Rec doesn't have any kind of screen to crack. Rather than a typical viewfinder, you can compose your shot by simply looking through the clip hole - like the sports finders found in some underwater cameras.

Unusually launched on Kickstarter, the Canon Ivy Rec seems perfectly designed for users who love skiing, skateboarding, water sports or mountain biking. With Wi-Fi and Bluetooth connectivity, you can instantly share photos and videos that have been shot with the Ivy Rec using the free Canon Mini Cam app with compatible iOS and Android devices.

This app features image editing and Remote Live View capability, which enables users to view their photos or videos wirelessly from the camera's perspective.

The Ivy Rec will go on sale for $129.99 / £119, but Canon has also announced that you can benefit from a mysterious exclusive introductory offer by registering your interest online.

The Ivy Rec is expected to be available from mid November.