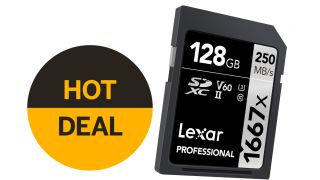 There is no such thing as having too many memory cards... and even if you do have stacks of them, you inevitably wish you had faster ones, or ones with a bigger capacity. This deal we have spotted at Amazon.com could be the answer to your prayers... as they have cooked up a tasty deal on a great Lexar card... which offers fast performance, a decent capacity and a lower-than-usual price.

The Lexar Professional 1667x SDXC card offers UHS-II class performance - with a video shooting class of V60, and a maximum transfer speed of 250MB/s. This card is not quite as speedy as the latest 2000x version... but at this price it is well worth this small sacrifice. Amazon is asking just $30.29 for the 128GB version - and at that price you might want to buy more than one!

Lexar Professional 1667X 128GB SDXC UHS-II/U3 Card |
now $30.59
This high-speed card is perfect if you are using have a camera with a high burst rate, or with 4K shooting capacity (or even if you are thinking of upgrading to one). The 250MB/s transfer rate makes this a class performer - and this 128GB version has been reduced from its already attractive price to an unmissable £30.59 a piece.
Limited time offer - US dealView Deal