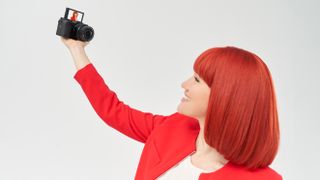 Fancy your own personal, private cloud for uploading photos to? Or an AI camera that never lets you out of its sights?

Here are 10 of the top announcements and most exciting photography products that we've seen so far.

The most significant phone camera launch of IFA 2019 was from Motorola, which aired what looked like a reasonably advanced camera system at a budget price. Available immediately and costing $450 / £385, the One Zoom’s key feature is an 8MP telephoto lens that offers 3x optical and 10x digital zoom.

Elsewhere in the quad-camera array is a 48MP all-rounder, a 16MP ultra wide-angle lens and a 5MP depth sensor. Its Snapdragon 675 chip is not the best, but its 6.4-inch OLED display and 128GB storage seem generous for the price – from first looks, it seems like one of the best camera phones around.

Check out our hands-on Motorola One Zoom review to see if it lives up to our admittedly lofty expectations!

In public for the first time since its official announcement was this filmmaking powerhouse from Panasonic’s Lumix line-up. A mirrorless camera designed for videographers, its tricks include 6K 24p video recording in 3:2 and no limit to the length of clips. At its core is a 24.2MP full-frame image sensor and a 3,050mAh battery that’s good for about two hours of recording.

We've now been hands-on with the new camera, so head over to our Panasonic S1H review to see how it performed.

With Bionz X features on loan from its Alpha range of interchangeable lens cameras, the newest flagship Sony Xperia 5 ($880 / £715) is a serious attempt at taking camera phones closer to ‘proper’ cameras.

The killer app, however, is the remarkable Eye AF inherited from Sony's mirrorless cameras, which finds, focuses on and follows the eyes of people in your shot, and keeps them in focus if they move.

However, a new augmented reality app for Android and iOS called Print Companion can embed a link to a 30-second video clip from any phone, so when you print it out anyone can point their smartphone over the picture and see the video appear. Could this be enough to rank the Smile Classic among the best instant cameras?

Slated for sale in October, and on show in Berlin, are these two new 24APS-C mirrorless cameras. An intriguing attempt to keep the APS-C format alive, the flagship Sony A6600 ($1,400 / £1,450) builds on the company’s million-selling A6500. Complete with a 3.5mm headphone jack for videographers, the A600 features 5-axis in-body image stabilization (IBIS) and super fast autofocus.

The step-down Sony A6100 is physically smaller and lacks the IBIS, but does feature the Real-Time Eye AF tracking tech found on the A6600. It looks to be an interesting attempt at a budget mirrorless camera that’s worth checking out.

We've had a chance to play with both cameras, so check out our Sony A6100 review and Sony A6600 review to see the verdict on Sony's latest APS-C entries.

Instantly becoming the world’s fastest 1TB UHS-I SD card, the SanDisk Extreme Pro 1TB is set to go on sale at the end of September. Boasting almost twice the capacity of the largest 512GB card in its Extreme Pro range, SanDisk’s first 1TB SD card is otherwise similar to those other cards – so expect read speeds of up to 170MB/s, but all-new write speeds of up to UHS-I 104MB/s.

This makes SanDisk's offering the fastest 1TB SD card available, so it's great for both 4K and 6K video shooting as well as sequential burst photography. It’s on sale now for $499.99 / £479.

Maybe you’re a solo traveller wanting to document your travel or a vlogger wanting to capture content – either way, you’re on your own. Showing at IFA is the Obsbot Tail Auto-Director from Remo Tech ($727 / £590), an ‘observation robot’ that uses face recognition and artificial intelligence to identify its subject (as in, you) which it then automatically tracks.

The camera itself is on a three-axis gimbal, which enables it to tilt and pan to keep you in the shot even if you move, dance or take a walk right around the camera. It can even track you if you’re giving a piece to camera in a crowd – or even if you jump off a cliff!

Trying to keep up with increasing resolutions and files sizes – and the onset of 4K video – Western Digital used IFA 2019 to announce a refresh of its popular My Passport and My Passport for Mac line-ups, the most interesting of which are huge 5TB versions.

Babies sell cameras. Many an expectant parent has invested significantly in photography gear to document the arrival of a child, but what does the baby see? ‘Babies first memories forever’ is the thinking behind Babeyes – a point-of-view camera designed to capture what a child sees from their cot.

A 1080p motion-detecting camera embedded in a teddy bear-shaped lapel badge, Babeyes records everything baby sees – mainly parents peering over the cot, of course – and the software complies it all into clips worth seeing. It’s on sale now for $139 / £112.

How about your own personal cloud? Although many of us auto-upload our phones’ photos to Google Photos for convenience, the free option throttles resolution – and besides, does anyone really want to put their precious photos in the hands of a third-party company?

Cue Amber, a private cloud that stays at home. Like an easy-to-use NAS drive, it’s got either 1TB or 2TB hard drives and can also come packed with face detection and AI for auto-categorizing photos.

That makes it work really well as a private cloud for a family; if every member syncs their phone with Amber, it can host a definitive collection of photos from, for example, a family holiday. It also casts content to a TV, just like Apple TV. Prices start at $550 / £466.