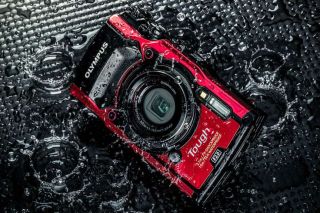 There is a more recent Olympus Tough TG-6, but this does mean that you can find some good deals on the older, but very similar, TG-5 (but do check the best prices of both in the tables below!).

Ready for the rough stuff of photographic life, the Olympus Tough TG-6 has a 1/2.3in sensor at its heart, providing a 12MP effective resolution.

As the Olympus TG-6 is a toughened model, it offers features including two glass panel layers to prevent the camera from fogging up in extreme conditions. It also comes with the likes of built-in GPS, a thermometer, barometer, and a compass, which record respective bits of data when the camera’s in use that can be later shared. This is the same Field Sensor system as found in the same company’s TG-Tracker model, and the data gathered can be displayed with images and videos using the Olympus Image Track app.

We also get the other usual toughened camera features, such as the ability of the Olympus TG-6 to withstand underwater use to depths of 15m, as well as drops from heights of 2.1m and temperatures as low as -10°C. In addition, it can withstand crushing weights up to 100kg.

The zoom lens in use here sports a 35mm equivalent range of a modest 25-100mm, with an impressive f/2 maximum aperture at the wide end, dropping down to a less impressive f/4.9 at maximum telephoto. Nevertheless, we do get a TruePic VIII processor, as found in Olympus’s OM-D E-M1 Mark II, and the Olympus Tough TG-6 can capture 4K video at 30fps, or shoot Full HD clips at high speed 120fps.

All of the above suggests not only a useful camera for taking shots in situations that you might feel are too risky for your smartphone, but the Olympus Tough TG-6 is also a capable travel camera, with the ability to shoot Raw files as well as the standard JPEGs.

Finally, it’s worth noting that the camera is available in either glossy red or black finishes, for those who like to coordinate with their ski gear or wetsuit/surfboard. Additional housings, conversion lenses and adapters – including those for underwater use – ensure that this is more of a base for an expandable system, rather than just a standalone tough camera.