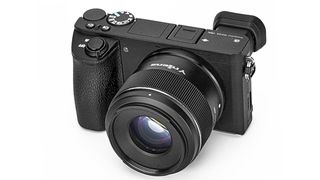 Yongnuo has announced its first lens for the Sony mirrorless cameras. The Chinese budget accessory specialist already products a number of highly-affordable prime lenses for Nikon and Canon DSLRs... but now has produced a 50mm f/1.8 'nifty fifty' lens for use on Sony E-mount APS-C-format cameras.

The Yongnuo YN50mm F1.8S DA DSM is designed to be used with the popular Sony A6000 mirrorless camera, and other more recent Alpha A6*** series models. As such the effective focal length becomes a 75mm, creating a lens that will be ideal for portraiture.

The lens is constructed from eight elements in seven groups, with a seven-bladed diaphragm, and weighs just 146g (5.1 ounces).

Pricing and availability for the Yongnuo YN50mm F1.8S DA DSM has not yet been announced, but it is rumored to cost under $100. Sony's own 50mm f/1.8 currently retails for around $248/£179 – although this is also compatible with full-frame Sony mirrorless cameras.