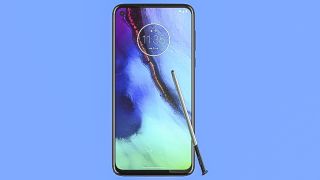 The Moto G-series has always showcased how well Motorola makes budget camera phones with an edge. The first Moto G rewrote the affordable smartphone rules, and eight generations later, the Moto G8 Plus has crammed a 48MP camera into a relatively low-cost handset. Now, it looks like the Lenovo-owned smartphone maker’s next frontier for its Gs is pen input, with recent leaks pointing to the name - Moto G Stylus.

The rumored phone name was shared by prolific tech leaker @Evleaks, shortly after a render surfaced showcasing an all-screen display with a punch-hole camera, and of course, that pen. Additional details reveal the phone’s codename – Sofia+ – which suggest it to be a variant of the G8 Power, another phone expected to launch this MWC.

If the G Styles shares the same internals as the Power, then specs look set to include a FullHD+ display, a Snapdragon 665 chipset, 4GB RAM and 64GB storage. In addition to the punch-hole selfie camera, there will likely be a multi-camera set-up around the back and Motorola’s trademark Turbo Charge feature delivering anything from 18W through to 45W charging as seen on the US variant of the Moto One Hyper.

Given the expected specs, Samsung doesn’t have much to worry about here. With the Korean brand’s Galaxy Note 10 and Note 10 Lite both packing relatively top-tier internals, Motorola’s rumored G Stylus will be going after a more cost-conscious type of phone user. That said, it could be the lowest entry point to decent pen input on-the-go and something fresher than another pixel-tastic candy bar smartphone, so we’re jazzed to see what Motorola ends up unveiling at Mobile World Congress on the 23 February 2020.