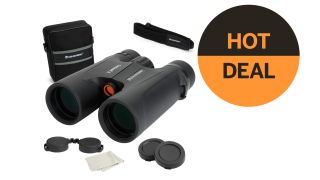 The Black Friday camera deals are really starting to heat up, and today we're seeing some amazing discounts on Celestron gear. From binoculars to filters, we've found some great products at even better prices for you. One of the deals we're most excited about is a Celestron 71346 8 x 42 Outland X Binocular, which has received a 39% discount!

This is just one of many amazing Amazon Black Friday deals on Celestron kit, but if you're interested then don't delay - this deal will run out at midnight on 26 November.

These binoculars have twist-up eyecups for quick adjustment and are covered in a protective rubber coating. They're waterproof and fogproof, which means you can carry them anywhere without worrying that they'll be damaged in less-than-perfect conditions.

However, these Celestron binoculars aren't the only amazing Celestron deal today. We've listed a few more of our favorites down below…

Celestron 18771-CGL PowerTank: £103 from £149
This portable power pack is specifically made for computerized Celestron telescopes using Lithium Iron Phosphate. It is built for up to 2,000 charge cycles and has an un-recharged shelf life of up to 10 years. Deal ends midnight 26 NovemberView Deal

Celestron NexYZ Phone Scope Adapter: £32 from £49
The Celestron NexYZ enables you to connect your smartphone to your telescope, spotting scope, binoculars, monocular, and microscope so you can capture photos and video through the eyepiece. Deal ends midnight 26 NovemberView Deal

Celestron 71333 10 x 42 DX Nature Binocular: £77 from £95
These binoculars are designed with the outdoor enthusiast in mind, as it's waterproof and fully rubber armored. These binoculars have a close focusing distance of 6.5 feet for viewing closer subjects. Deal ends midnight 26 NovemberView Deal