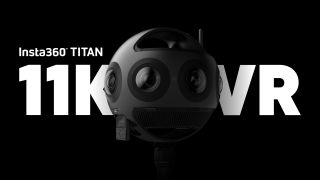 Ordinary 360 cameras use a two small smartphone-size sensors back to back, with a 180+ degree fisheye lens over each, then stitch the two hemispherical images into a single 360 degree image in-camera in real time.

That’s fine for casual use but pro VR (virtual reality) content makers need much higher levels of quality, and that’s the market the Titan is aimed at. To achieve its stunning resolution it uses no fewer Than eight Micro Four Thirds (MFT) sensors arrange around its bowling ball shaped circumference. These are the largest sensors available in any standalone VR camera, and offer far higher resolution, dynamic range, low-light performance and colour depth than regular 360 camera sensors.

The Titan uses the same advanced FlowState image stabilisation system used in its Insta360 One X model, which is currently at the number one position in our Best 360 cameras buying guide. Insta360 claims gimbal-like 9-axis stabilisation that keeps your VR viewpoint level no matter how the Titan is being handled or manoeuvred. It also uses Insta360’s Farsight live monitoring system using a transmitter and a receiver that can be attached to a phone or tablet.

11K video is captured at up to 30fps, but if you want super-smooth slow-motion effects you can shoot 60fps at 8K resolution or 120fps at 5.3K resolution.

The Insta360 Titan is being showcased at the annual CES exhibition in Las Vegas from January 7-11 and the company has opened ‘reservations’ for its new product which is set to ship in April.

This incredible technology doesn’t come cheap of course, so the price tag of $14,999 USD pitches the Titan firmly at the professional market.