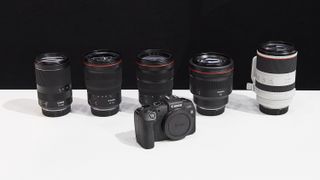 It’s an exciting time to be a Canon EOS R early adopter, as Canon is hard at work filling out the lens line-up for its new full-frame mirrorless system.

While we don’t have anything confirmed as of yet, the camera rumor mill is abuzz with potential specs and details of upcoming lenses for the system, and it seems that the scuttlebutt at the moment is indicating we’ll see three new lenses in early 2020, possibly at or before CP+ in Tokyo, which happens in February.

According to Canon Watch, the individual models of lenses are rumoured to be as follows: a 24mm f/1.4, a 135mm f/1.8 and a macro lens of unspecified focal length, though one that is intriguingly teased as being  the "first of its kind". As the current lens line-up and the projected slate of confirmed RF-mount lenses currently contains a lot of zooms, it would make sense if Canon were moving to focus on filling out the selection of prime lenses with optics such as these.

We’re talking a way down the road here, as Canon still has several lenses that have been announced but not released – you can get a full overview of the current state of the Canon RF-mount roadmap here.

Current RF-mount lenses are also making a splash, with the models that have been released so far arriving to favorable reviews and reactions from photographers who are adopting the system.

While we don’t know for certain whether these lens details are legit, one thing that’s definite is that interesting times are ahead for full-frame mirrorless. A recent market data report from Japan, also reported by Canon Watch, showed Sony starting to lose ground in this sector as Canon and Nikon have been picking up traction. It’ll be interesting to see if this trend continues, and how Sony will respond if it does.

We’ll bring you more detail on these new lenses and all other news on full-frame mirrorless as soon as we get it.