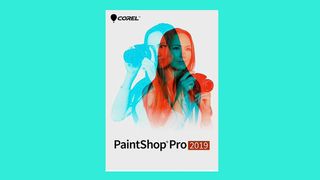 There are still a few days to wait until Amazon Prime Day 2019, which starts late Sunday night and runs through til the end of Tuesday - but we have just spotted this great deal at Walmart that we think you might be interested in. Corel PaintShop 2019 is the latest version of Corel's full-blooded photo editing software, and Walmart has slashed the price of the the program to $39.99.

The program is delivered via electronic download, so you can buy and start using the software within a few minutes. The recommended price of this software is $79.99 - so by our math that is a half price deal. And it is also less than you can currently buy the software from Amazon or Corel themselves.

PaintShop Pro 2019 is aimed at photographers and photo-manipulation fans, , although it's also has features that will appeal tographic designers and business users in mind.

The new version brings the ability to straighten spherical images captured by 360º cameras and flatten them into panoramas, or turn them into circular 'tiny planets' or surreal ‘rabbit hole’ images where the sky is just a disc in the centre of the image. There’s also a Pic-to-Painting plug-in which can take your photos and convert them into digital paintings in a variety of styles.

PaintShop Pro 2019 adds more than 100 cameras to its list of supported Raw file formats, now totalling over 650, together with support for the latest WinTab and Windows Ink tablet and stylus devices.

This popular photo editor offers full RAW file support, so is an affordable choice for wants to buy a full-function image manipulation program without the need to pay a subscription. The lates PaintShop Pro 2019 is compatible with Windows 10, Windows 8/8.1, Windows 7 with the latest service pack (64-bit or 32-bit editions).View Deal

Corel also states that it has concentrated on improving performance, with a Crop tool that’s now up to five times faster, together with faster Clone Brush and One Step Photo Fix tools, and a list of more than 50 bug fixes.

Beginners who are still learning the basics of photo editing can benefit from a Learning Center panel that pops out from the right-hand side of the screen to help with whatever task they’re working on. In addition to this, there's also a ‘Discovery Center’ that lets the user find out more about photo editing techniques and ideas.

This is just one of the deals that Walmart has in its Summer Savings Event - which has been timed to compete with the upcoming Amazon sale, where we are expecting some great Prime Day camera camera deals.

The best tablets for photo editing and photographers in 2019