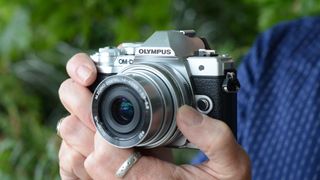 Olympus has expanded its Micro Four Thirds line with the OM-D E-M10 Mark III, its seventh addition to its acclaimed OM-D series.

Despite the fact that it's the most junior member of the digital OM system, it packs a wealth of functionality that makes it ripe for the first-time user looking for plenty of growing space.

Highlights from the spec sheet include 4K video recording – the first time we've seen this on an OM-D E-M10-series model – together with a five-axis image stabilisation system that promises up to four stops of correction.

You also get the same TruePic VIII processing engine that stars in the flagship OM-D E-M1 Mark II model, which allows for a highly respectable 8.6fps burst-shooting option.

Here's a broader look at what it offers:

The OM-D E-M10 Mark III will be released in black and silver finishes, and will go on sale in the middle of September.

As is usually the case, Olympus is making the OM-D E-M10 III available in a variety of configurations.