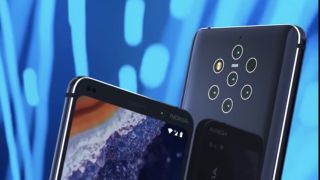 2019 may still have that new paint smell but that doesn't mean that it isn't short of camera phone rumors. The latest is a new look at the Nokia 9 PureView - an upcoming five-lens camera phone that could be coming sooner that anyone expected.

The new video is a render, leaked by MySmartPrice, shows off the Nokia 9 PureView, revealing once more a back that's packed with camera optics. We first saw this layout back in November 2018.

The video also offers up a number of specs that we should expect to see on the camera phone.

These include: 5.99-inch HDR10-supporting 'PureDisplay', a Qualcomm Snapdragon 845 processor, 6GB of RAM, and 128GB of storage.

This is all well and good, but it's the camera details we are after and these already sound exciting enough to rattle our list of best camera phones, even if the details are a little threadbare.

We do know that the five cameras on the back use Zeiss optics and will be able to shoot images simultaneously. Nokia reckons this allows the phone to capture 10x more light, compared to 'regular smartphones'.

The Nokia 9 PureView will also use some of Google's imaging power to offer the ability to change focus after an image has been taken (within Google Photos), the video also highlights HDR photography, and Google Lens functionality. This sounds a lot like the Post Focus feature already seen on many Panasonic mirrorless cameras.

It was initially thought that the Nokia 9 PureView was going to launch in February at Mobile World Congress 2019 but it is now thought that HMD (which owns the Nokia brand and PureView labelling) will reveal this best camera phone challenger before the show in January.