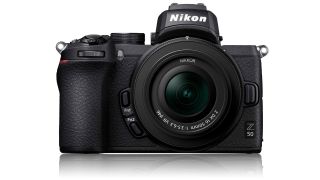 Nikon has launched its new Z 50, an APS-C mirrorless camera designed to reach “new audiences” at an affordable and “comfortable” price point, and it looks set to give the enthusiast sector of the camera market a big boost.

Nikon mirrorless cameras are available already, but the Z 6 and Z 7 are more expensive full frame models aimed at an expert/professional audience. The Z 50 is a much more affordable model and uses a smaller 20-megapixel APS-C sensor, and is more in line with its mid range hobbyist DSLRs like the Nikon D7500 and D500. Already the Z 50 looks poised to become one of the best Nikon cameras for amateur photographers and vloggers.

It’s also going to compete head on with mirrorless cameras from Canon, Sony and Fujifilm and the best mirrorless cameras on the market. It’s not aimed at beginners, but hobbyists, upgraders and “content creators” who will shoot both stills and videos. This means it will be up against cameras like the new Canon EOS M6 Mark II, the Sony A6600 and the Fujifilm X-T3 and X-T30.

These cameras already have pretty extensive lens ranges, but the latest Nikon lens roadmap, unveiled at the same time as the Nikon Z 50, shows Nikon is catching up fast.

Nikon says the Z 50 closest to its existing D7500 DSLR in its specifications and intended audience, though it could also appeal to advanced beginners looking at the smaller Nikon D5600 DSLR too.

There’s lots in the Nikon Z 50 which will be familiar from the company’s existing cameras. The 20.9MP sensor looks like a close copy of those used in the D7500 and D500 DSLRs, compromising slightly in resolution compared to 24MP rivals in order to achieve a balance of readout speed and high ISO image quality. The difference here is that the Z 50 sensor has 209 phase detection AF points built in.

The Z 50 offers uncropped 4K oversampled video, which brings it into line with its chief rivals (though the Fujifilm X-T3 is out on its own here, capturing 4K at up to 60p). What is impressive is the Z 50’s ability to capture full HD video at up to 120p for a smooth 4x slow motion effect.

The 209-point on-sensor phase detection autofocus system is inherited from Nikon’s full frame Z-series cameras and covers a very creditable 90% of the width and height of the frame.

Interestingly, the Z 50 does NOT have in-body stabilization, unlike the larger Z 6 and Z 7 models. Nikon cites size, weight and heat dissipation as factors in this decision, and of its mirrorless APS-C rivals, it is only the Sony A6500 and A6600 that have in-body stabilisation. (Olympus and Panasonic mirrorless cameras have IBIS as standard, but they use smaller format Micro Four Thirds sensors.)

Nikon’s remarks about size make sense given the Z 50’s impressively compact dimensions. The styling is somewhere between a compact DSLR look and a rectangular ‘rangefinder’ design. It has a deep front grip, however, and the top and front panels are metal.

Interestingly, Nikon has chosen to fit a single SD/SDHC/SDXC memory card slot to this camera rather than the XQD slot used in its Z 6 and Z 7 models – but it is aimed at a slightly less expert audience. Battery life is quoted at 300 shots, which is poor compared to a DSLR but about what we’d expect from a current mirrorless camera – and the Z 50 does support USB charging, so you can top up its battery from a portable power bank. Nikon has even found space to cram in a small pop-up flash.

If there’s a new Nikon APS-C format mirrorless camera, does that mean a new lens mount? No – the Z 50 uses the same Z mount as the existing full frame Nikon Z 6 and Z 7. Any Z mount lens can be used on the new camera – though the smaller sensor means there will be the usual 1.5x crop factor.

Nikon will be in the same position, lens-wise, with its mirrorless cameras as it is with its DSLR lenses. You CAN use full frame Z mount lenses, but for a standard kit zoom or any ultra-wide lenses, you will need lenses designed specifically for the smaller format.

Indeed, Nikon is launching two new lenses alongside the Z 50. One is the Nikkor Z DX 16-50mm f/3.5-6.3 VR  retracting pancake zoom with VR. This uses a mechanical retraction mechanism rather than the slower electrical ‘power zoom’ system used by some other makers – it’s also amazingly slim when retracted, and does not extend past the front of the camera grip.

So can you use Nikon DSLR lenses on this camera? Yes, you can! The Z 50 accepts the same FTZ lens mount adaptor already available for the larger Z 6 and Z 7 models, which means it will be easy for existing Nikon DSLR users to migrate their lenses to the new camera or even use it alongside their existing DSLR setup.

That’s pretty competitive pricing for a brand new camera, at a time when camera prices for the latest cameras are staying pretty strong and stable. The Z 50’s specifications are enticing enough, but its aggressive pricing could be an even bigger factor in taking sales from existing mirrorless rivals.