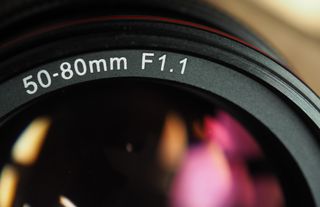 Much has been made of the "crazy" lenses that can potentially be produced for Canon's RF mount system, which accommodates optical formulas only possible with its 54mm diameter, 20mm flange back distance and 12-point electrical contacts.

The Canon RF 50-80mm f/1.1, however, takes that crazy to a whole new level. It would be the manufacturer's fastest ever lens for the Canon EOS R – and close to its fastest ever lens period, behind only the legendary Canon EF 50mm f/1.0L USM.

However, that was a prime lens; for a zoom lens to have a constant f/1.1 aperture is truly remarkable – and is exactly the kind of showcase lens that would demonstrate what a uniquely capable tool the EOS R can be… especially in the form of the rumored hi-res Canon EOS R, which could boast 70-100 megapixels.

Clearly the company wouldn't release all four variants – if, indeed, it produces this lens in any variant – so Canon is simply getting its ducks in a row for such as time as it's ready to pull the trigger on this design.

And, while the f/1.1 would be a genuine show-stopper, the truth is that an RF 50-80mm lens even as 'slow' as f/1.8 would still be an incredible optic for the EOS R. Indeed, that might be the likeliest outcome; looking at the sheer number of elements in the f/1.1 design, it may well be too exotic and too expensive to produce.

Then again, given that the Canon 85mm f/1.2L DS is as boutique as they come, with an anticipated $3,000 price, maybe nothing is too exotic or expensive any more.