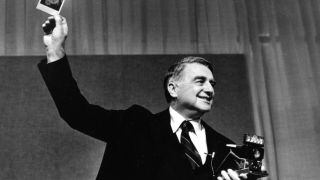 Edwin Land, the inventor of Polaroid cameras and film, also invented polarizers and ND filters. In fact Land, who was the Steve Jobs of his era, was just 19 years old when he invented the polarizer – which was actually the first product called Polaroid.

The under-publicized history of Edwin Land and Polaroid has been broken down in a fantastic video by YouTuber Todd Dominey. This visual essay isn't just essential viewing for fans of instant film, or even photography, but for admirers of technology and entrepreneurship in general.

It details Land's journey starting as a kid at summer camp, where a counselor introduced the restless youngsters to the Iceland spar – a crystal that, at the right angle, can eliminate glare and reflection from the sun.

What was a momentary distraction for a bunch of kids at camp became an obsession for Land, who as a teenager started trying to recreate the effects of the crystal until, at 19, he invented the polarizer that we all know today – and he called it Polaroid.

Polaroid was used in everything from sunglasses and World War II pilot goggles, right through to the Copper King – an express train boasting cars with circular windows, which enabled passengers to rotate them to get a clear view of the scenery outside. Effectively, giant variable ND filters!

As the legend goes, while on vacation with his family in Santa Fe in 1943, he was taking photographs of his daughter who began asking why she couldn't see the pictures until weeks later. Frustrated with the slow development process of traditional film, Land sat down that afternoon and began sketching the concept for instant cameras and film – which was realized five years later as the Model 95.

Of course, this leads into the long and contentious relationship with Kodak, which started off as a partner (uncredited, much to Kodak's chagrin) in the design and manufacture of Polaroid cameras before things disintegrated into a 15-year, $909 million court case.

It's a truly fascinating watch, documenting the rise and fall of Polaroid before it was resurrected as the modern Polaroid brand we know and love today. It's definitely worth 22 minutes of your time, and will enrich your knowledge of the photo industry.