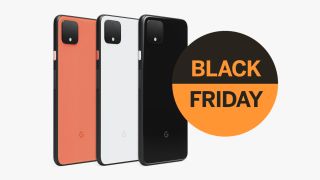 The Black Friday camera just keep pouring in, but this amazing Google Pixel 4 deal couldn't help but catch our eye last night! But today the offer has been even sweeter… This fantastic discount means you can pick up a Google Pixel 4 64GB with 20GB of data and unlimited texts and minutes for just £29 per month with only £9.99 upfront.

This is just one of many amazing Black Friday phone deals, but we can't deny that this Vodafone Google Pixel 4 deal is particularly special. However, we don't know how long this discount will hang around for, so don't delay!

With an impressive astrophotography mode, the Google Pixel 4 aims itself squarely at photographers who want to be able to take great photos on their phones as well as their cameras. The Google Pixel 4's primary camera has a 12MP 1/2.55 sensor and features dual-pixel and phase detection autofocus. However, there's also a second telephoto camera that features a 16MP sensor and a 45mm focal length.

This is by far and away the best deal we've seen on the Google Pixel 4, as it will cost you roughly £705 for the handset and two years of 20GB data and unlimited texts and minutes for a phone that has a RRP of £669.