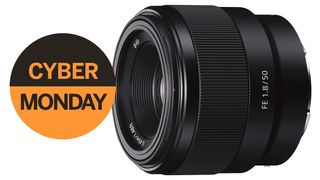 Cyber Monday isn't all about cameras as there are some great lens deals too. We've picked four from Park Cameras, all for under £200 (some are well under), and all for Sony E-mount cameras. Here's a way to give your Sony system a boost without spending a fortune! It's all part of the Park Cameras flash sale on Sony lenses.

The Sony FE 50mm f/1.8 is a smart buy because you can use it on an APS-C Sony as a 75mm equivalent 'portrait' lens but it also works as a standard prime lens on full frame Sony mirrorless cameras. The Sony 35mm f/3.5 macro lens is an absolute steal at this price, while the 16mm f/2.8 is the perfect pancake lens for Sony APS-C mirrorless cameras like the A6000. If you set your optical sights a big higher, see our guide to the best Sony lenses you can get – but if you've got an eye for a bargain, these are just brilliant.

Don't forget, the Cyber Monday 2019 sales are on until midnight December 2, so you've still got time to get those Cyber Monday camera bargains!

Sony FE 50mm f/1.8 Prime Lens – just £161.10 after 10% discount!
This modest-sounding lens has a double life! It's the ideal standard 50mm prime for full frame Sony mirrorless cameras, but it also fits Sony APS-C models like the A6000-series cameras, where you can use it as a 75mm equivalent 'portrait' lens. What a bargain!
UK dealView Deal

Sony 30mm f/3.5 Macro lens – only £179.10 after 10% discount!
Do you need a macro lens for your Sony APS-C camera? When you can get this one for just £179.10 on Cyber Monday, then definitely! It's the perfect macro lens for occasional close-up fans who don't want to spend a fortune on a lens they only use now and again.
UK dealView Deal

Sony 16mm lens f/2.8, just £161.10 after 10% discount – amazing!
They can make mirrorless cameras as small as they like, but the lenses are as big as ever, right? Not this one! The Sony 16mm f/2.8 pancake prime offers a 24mm equivalent angle of view and it's so slim it hardly adds to the thickness of the camera – you could probably even fit it in a coat pocket!
UK dealView Deal

Sony VCLECU2 Ultra Wide Converter, now only £107.10 after 10% discount
Here's a lens you won't see very often. You don't use it on its own, but instead attach it to the front of the Sony 16mm f/2.8 or 20mm f/2.8 lenses to make them ultra-wide-angles equivalent to 12mm and 16mm lenses respectively. We haven't tried it, so we can't vouch for the optical quality, but how useful is that!
UK dealView Deal