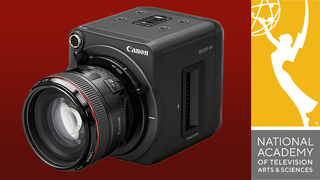 Think your camera has pretty good ISO performance? Trust us, it's nothing compared to the Canon ME20F-SH with its ISO sensitivity in excess of 4 million – a technical feat so impressive that the camera will be honored by Hollywood with a prestigious Emmy Award.

The Canon ME20F-SH has been announced as the winner of the 2020 Technology & Engineering Emmy Award – a prestigious industry accolade from the National Academy of Television Arts & Sciences in the United States.

The Award honors "development and innovation in broadcast technology and recognizes companies, organizations and individuals for breakthroughs in technology that have a significant effect on television engineering."

The ME20F-SH is certainly deserving of the title, with its ISO in excess of 4 million (+75dB) enabling it to shoot in almost complete darkness at less than 0.0005 lux. Its enhanced full-frame CMOS sensor produces 1080p video even when a night sky is lit solely by starlight – making it the tool of choice for such broadcasts as National Geographic's celebrated Earth Live program, which documented nocturnal wildlife.

"We are grateful to receive this esteemed recognition for our revolutionary ME20F-SH camera," said Canon USA president and COO, Kazuto Ogawa. "This marks Canon’s fifth Emmy, an accomplishment we are immensely proud of. This award is a testament to the company’s commitment and vision for developing imaging tools that help creative professionals see what was previously considered impossible.”

As illustrated by the image above, the camera is a truly ferocious low light performer, capable of shooting 1080p video at up to 60 frames per second in situations that would be impossible for conventional systems. This is thanks to its specially developed sensor with a 2.26-megapixel resolution, which affords the camera much larger photosites for maximum light-gathering and minimal noise.

Who said megapixels are everything, eh?

The 71st Annual Technology & Engineering Emmy Awards will take place on 19 April during the NAB 2020 show in Las Vegas.