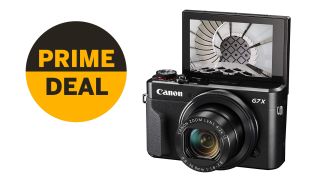 There are some brilliant Prime Day camera deals running on Amazon UK for DSLRs and mirrorless bodies, but this one is tailor made for all the vloggers, bloggers and YouTube sloggers out there – the Canon PowerShot G7 X Mark II has dropped in price by £100 to just £399!

Canon PowerShot G7 X Mark II compact save £100 now £399
A great luxury compact that offers a 1-inch 20MP sensor for high quality images – and a great buy with the £100 Prime Day discount.. It has a 4x zoom and can shoot stills at up to 8 frames per second, or record 1080p video. This sports a fold-up 3-inch screen that will appeal to vloggers and selfie lovers alike.
UK deal – ends midnight 16 JulyView Deal

One of the best compact cameras for content creators, the G7 X Mark II has become monstrously popular with vloggers getting started in their journey. With a 180° tilting 3-inch touchscreen it's easy to frame your footage (and shoot those selfies), and the 1-inch 20.1MP sensor makes your content crystal clear.

Armed with a 24-100 mm focal range you're covered for just about any shot or scenario. Able to record 1080p FullHD video at up to 60 frames per second, and boasting optical image stabilization to keep your footage stable even without a gimbal, the G7 X Mark II is a great place to get started with vlogging.

Canon EOS 6D Mk II body: save £250, now £999
This is one of the standout deals in the Amazon UK prime day sale – and is the lowest price we have seen on this highly-respected full-frame DSLR camera. If you want to upgrade your Canon DSLR, or want a pro-quality camera with a great system of lenses behind it, then thanks to this £250 discount there has never been a better time to do it!
UK deal ends: midnight 16 JulyView Deal

Sony A7 full-frame camera + 28-70mm lens:
£509 after cashback
This was the first ever full-frame mirrorless camera, but even though it is old it is still a great way little camera – and at this price it is a real bargain. The camera comes with Sony's own 28-70mm f/3.5-5.6 standard zoom from Amazon UK. You pay £659, but get £150 back from Sony via its summer cashback promotion.
UK deal ends: midnight 16 JulyView Deal

Sony RX100 IV large-sensor luxury compact camera £429 after cashback
This was the successor the the RX100 III(which is also in the Prime Day sale), but it is worth paying a bit more for this Mark IV model if you want 4K video shooting. Another plus is a faster 16fps motordrive speed. Otherwise, this has the same core large one-inch sensor and fast Zeiss zoom. You pay £479, but get £50 back from Sony via its summer cashback promotion.
UK deal – ends midnight 16 JulyView Deal

Sony FDR-AX33 30x zoom 4K camcorder £349 (including cashback)
This is our current favourite in our top ten best camcorder guide... but it is now reduced £100 for Prime Day, and you also get an additional £50 back from Sony through its Summer Cashback scheme. You pay £399 for the 4K camcorder with its 10x Zeiss zoom - but after cashback this effectively just costs you £349.
UK deal – ends midnight 16 JulyView Deal

Manfrotto MVH502AH fluid video head £96.25
This is one of our favorite video tripod heads. The fluid head mechanism is designed to give you smooth pan and tilt movements, so that you can follow subjects as you actually record your footage on a DSLR, mirrorless camera set-up, or camcorder. Takes a payload of up to 7kg.
UK deal – ends midnight 16 JulyView Deal

SanDisk Ultra 128GB microSDXC memory card  - £14.49
Save over £6 on this handy 128GB microSD card that is perfect for topping up the storage on your smartphone, action camera or dash cam. This A1 class card offers transfer speeds of up to 100MB/s and comes with an SD card adapter.
UK deal – ends midnight 16 JulyView Deal

Ring Stick Up Cam Battery | save £90 now £89
This is the best of all the Ring security camera options on Prime Day... this wifi smart home camera is under half price, but only for the one day. It can be used indoors or outdoors - and can be mounted on the wall, ceiling, or simply sat on a shelf.
UK deal – ends midnight 15 JulyView Deal

The best Amazon Prime Day camera deals: everything you need to know
The best compact cameras in 2019: from superzooms to point and shoots
The best camera for vlogging in 2019: we pick the top 12 vlogging cameras