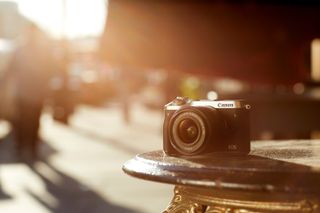 Canon is preparing to release its latest mirrorless cameras in late August, but they won't be full-frame bodies – instead we'll be seeing a pair of new APS-C cameras in the shape of the Canon EOS M5 II and Canon EOS M6 II.

UPDATE: Further specifications for the Canon EOS M6 II have now been leaked, which are included below.

That's according to a report from Canon Rumors, which notes that the cameras – along with the Canon EOS 90D – are among a slew of products that the manufacturer will reveal on or around 28 August.

As per the company's just-released (and more than slightly concerning) Q2 financial report, Canon will continue to double down on mirrorless cameras as the market shifts ever further away from DSLRs.

As such, replacements for the welcome but underwhelming Canon EOS M5 and M6  make sense – though while the former was fairly expected, the latter is something of a surprise.

For the M5 II, Canon is incorporating "a similar EVF to the Canon EOS RP" – the 0.39-inch EVF, 2.36 million-dot viewfinder that was actually transplanted from the Canon EOS M50.

Something definitely not transplanted from the RP or the M50, though, is 4k video recording without any crop – something that has hobbled every one of Canon's 4K-capable cameras (which, cynics would say, is to protect the Cinema EOS line).

Alleged specs for the Canon EOS M6 II have now been leaked by Canon Rumors, which are as follows:

Canon EOS 90D – a DSLR with an EVF, or a mirrorless EF mount camera?
Camera rumors 2019: what new cameras are coming out this year?
The best Canon camera in 2019: our top ten choices, from PowerShot to EOS