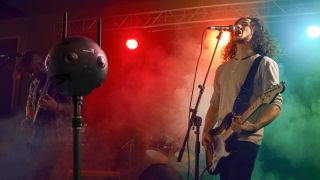 From the world’s smallest travel zoom and a 360 camera to phones with ‘smart launch’ and dual camera setups, this year has has seen some intriguing photography launches.

Here are some of the top announcements and most exciting photography products that we've seen so far, that differ from what your average DSLR offers.

All hail the first 8K 3D 360 video camera. A mini football-sized six-lens professional VR camera, the Pro2 can shoot 8K-per-eye 3D 360 video, but just as import is how it tries to address the major pain-points for 360 video creators. “VR production is huge battle, from capture and editing to stitching and delivery,” said Eli MacKinnon, Insta360’s global brand strategist. “The Pro 2 reinvents the workflow.” Using a proprietary transmission system called Farsight that attaches to both the Pro 2 and a tablet, a dedicated radio link is made that covers 300m, so the director can get out of the shot – that’s a major challenge for VR creators. As well as long-range live monitoring, it’s got FlowState image stabilisation that uses the gyroscope to make 360 content more watchable, and there’s a tie-in with Adobe Premiere Pro to make editing much quicker. It shoots 8K 3D at 30 fps, 8K 3D at 60 fps, and 4K 3D at 120 fps. It’s priced at £3,845.

While many photographers still travel with a DSLR, there’s s definite move to mirrorless cameras, but the so-called ‘travel zoom’ camera is the all-in-one option. That’s exactly how Sony described its new DSC-HX99, even calling it the ’world’s smallest travel high zoom camera’. Going from 24mm to a whopping 720mm super-telephoto, the DSC-HX99’s ZEISS Vario-Sonnar T lens also boasts 4K video recording (including at 100fps), complete with full pixel readout and no pixel binning. Expect features including continuous shooting at up to 10 frames per second (though only up to 155 shots), autofocus in 0.09 seconds, and location logging via a Bluetooth connection to a phone. It also shoots in RAW and has a 180-degree tilt-able LCD screen. The Sony Cyber-shot HX99 will go on sale in October 2018 for £450.

Read more about the Sony HX99

Chinese brand Huawei has gone from nowhere in the last year or so to wrestle second place in the smartphone market from Apple. Its latest phone is a whopper, measuring 6.3-inches with a 2340x1080 pixel resolution. So photos will look great on its screen, but what about the camera? It’s got a dual-camera setup, with the rear having 24MP (with an aperture of f.2) and 2MP and the front camera boasting the 20MP (f1.8) and 2MP. The 2MP lens measures depth, which can be changed afterwards, as can the focus. A lot of the ‘AI’ is a bit selfie-orientated, but it now has 22 AI Master modes, automatically choosing picture modes that include some pretty niche effects such as ‘waterfall’, ‘panda’, ‘ancient building’.

The 7.6mm thin Mate 20 Lite, which also has also got 64GB of internal storage and a microSD card slot, goes on sale next week for £379.

Read more: What is an AI powered camera?

Instant photography is back. Again. It’s been through many rebirths, the latest being this week in Berlin with the launch of the Polaroid Mint Instant Print Camera. Looking more like a smartphone than a camera, the Mint keeps it simple; there’s an automatic flash, an integrated selfie mirror – obviously – and three picture preset modes (colour, black and white, and sepia). It takes 16MP photos and prints them out in 2x3-inch size. It’s got a micro SD card slot, a self-timer mode, and comes in black, white, red, blue and yellow. It’s on sale now for £110.

How about a ‘smart launch’ phone that instantly fires-up the camera app as soon as you hold your phone horizontally? That’s a key photography nicety on this, the only real flagship smartphone launched at IFA 2018, and the first based on Android 9 Pie. A 6-inch 18:9 OLED display that can show HDR video, the XZ3 can record video in 4K HDR, and capture in ‘super slow’ motion at 960 frames per second. Its 13MP front camera and a 9MP rear are backed-up by Sony’s Advanced Motion Eye camera, which includes time-saving features like superior auto, predictive capture, predictive autofocus and a smile shutter. The XZ3 also happens to be one of the fastest phones around, with a Snapdragon 845 ensuring a connection speed of 1.2Gbps if you happen to live in a pre-5G area. It’s being sold in September in black, white, green and red, for a price TBC.

Another instant camera showing at IFA is Printomatic, specifically in its new blue, bright green, black and ‘millennial pink’. It’s only capable of 10MP, but the Printomatic’s party trick is, of course, to spit out colour photos a few seconds after you’ve taken the picture. Worthy of a serious photographer’s kitbag? Probably not, but the tech behind instant 2x3-inch photos has moved on a bit with Kodak now using its Zink Zero Ink heat-activated paper that’s waterproof, tear-proof and with an sticky back for easy scrapbooking. It sells for £90.

It wowed the crowds when announced at IFA 2018 with a series of 8K resolution TVs, so much so that Sharp’s impressive trio of phones – its first in Europe (though it’s been producing phones in its native Japan for decades) – went under the radar. From a photography point of view, its flagship phone, the 6-inch B10, is pretty respectable. It’s main camera offers 13MP while the front camera ups that to 16MP, partly for selfies, partly for a ‘face unlock’ mode. Its 64GB is enough to store a lot of photos, while there’s also a micro SD card slot. Its dual SIM card slots will appeal to frequent travellers who want the option of using a local SIM.

Do you miss manual analogue photography? Resurrected by Polaroid Originals, the OneStep+ is an analogue instant camera, but with one big difference; it connects to a smartphone app via Bluetooth. Despite its nostalgic design (based on the iconic design of the original OneStep camera from 1977), it’s got some relatively advanced features; a portrait lens that works from a foot away from the subject, and plenty of creative features enabled by the app. A full manual mode gives full control over aperture, shutter speed, and flash intensity, while there’s also a remote trigger, even a ‘clap’ trigger, a self-timer, and a double exposure/light painting modes for novelty compositions.

Read more about the Polaroid OneStep+

LG’s new G7 One boasts cameras with the same AI goodies found further up the food chain. Or, at least, it soon will have; LG’s AI CAM suite of shooting categories – person, food, pet, landscape, city, flower, sunrise and sunset – will be added via an update later this year. ‘Perfectly optimised’ shots may have to wait, but the hardware is already in place; this 6.1-inch phone, a slightly pared-down version of its flagship G7 handset, has a 16MP rear camera that boasts an aperture of f/1.6, and a slightly wider angle 8MP front camera that gets to f/1.9.

The business-like Blackberry brand continues to serve its niche of fans with a built-in physical keyboard, but the new-at-IFA 2018 BlackBerry Key2 LE has more going for its camera than any of its previous phones. On the rear of this 4.5-inch phone is a dual rear camera (13MP and 5MP), which include plenty of portrait mode presets, and an 8MP front camera with features like flash and ‘wide selfie’ for capturing yourself in front of panoramic views. It’s also got Google Lens in the camera, which displays information on landmarks and buildings you point the Key2 LE at. It’s on sale in September for £349 in red, gold or black.

£30,000 prizes: Digital Camera Photographer of the Year 2019 is open for entries