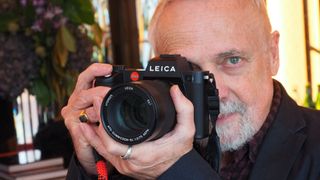 These cameras won’t suit everyone, and none of them are perfect, but each one brought a special characteristic or innovation that made us think about camera design all over again, and reminded us that brilliant (or obvious) ideas are just as important as megapixels and bullet points.

Here, in chronological order, are the ten cameras that blew us away in 2019...

It’s great to see DJI driving deeper into the action cam market, and while GoPro still claims the high ground with the Hero8 Black, the DJI Osmo Action has a killer feature – a front-facing screen. So once that would be seen as the ultimate vanity, a camera made solely for selfies, but the market has changed. Vloggers and content creators don’t just need to grab POV footage of their adventures, they need to turn the camera round and speak directly to their audiences too – and that’s why the Osmo Action is such a smart design. Why we were wowed: A front screen for vloggers – so obvious!

What can we say about the GFX 100? It’s fearsomely expensive compared to even top-end full frame cameras, but actually quite cheap for a medium format camera, especially one with 100 million pixels. Not only that, it shoots 4K video, has phase-detect AF and offers in-body image stabilization. It’s a stunning camera, but even more stunning as a technical achievement – and one which pulls the rug out from the previous prestigious full frame camera market. Is medium format set to become the new full frame? Why we were wowed: 100 million pixels in a camera you can just pick up and use

New camera phones come thick and fast, each one with more megapixels, more cameras and more photo features than the last, and amidst all the hype around Huawei, Google, Sony and the rest, when the Apple iPhone 11 Pro arrived it looked, well, disappointingly conservative. But what the iPhone 11 Pro lacks in fireworks it makes up for in sheer quality. Yes, it’s ‘only’ 12 megapixels, but its rivals either capture 12MP too or downsample their regular images to 12MP even if their native resolution is far higher. The iPhone 11 Pro’s ultra-wide lens is a massive step forward and, more than that, its colors, exposures and overall ‘look’ are completely consistent across all three cameras. This is a camera phone you would use for proper photography. Why we were wowed: Consistency, quality, simplicity

So, the DSLR is dead, and mirrorless cameras are the future, right? Well, somebody should tell Canon, because it launched a DSLR with the highest resolution yet in an APS-C sensor, 4K uncropped video, Dual Pixel CMOS AF, a vari-angle touchscreen, 10fps shooting and – what impressed us most of all – a camera big enough to grip, hefty enough to balance with bigger lenses, and perfectly judged external controls that reminded us what we’ll miss if DSLRs ever go for good. Why we were wowed: It proved how good DSLRs still can be

While full frame mirrorless camera makers jockey for position with incremental improvements in video frame rates, bit depths and crop factors, Blackmagic storms in with a camera that just blows them all into the weeds. The Blackmagic Pocket Cinema Camera 6K isn’t for everyone. It doesn’t match its rivals’ continuous AF modes, it doesn’t have a vari-angle/tilting screen and its design is distinctly unconventional. But this is a camera that can capture 6K raw video internally. If Blackmagic can do this, at this price, what are the rest playing at? Why we were wowed: Staggering 6K specs at an equally staggering price

Last year’s 40+ megapixel cameras set a new high water mark for full frame sensor resolution, but with the A7R Mark IV, Sony has just raised the bar AGAIN. Have we hit the point of diminishing returns? Would the extra megapixels really make a visible difference? They do, and the megapixel wars aren’t over yet. We don’t yet know what the upper limit for useful full frame resolution will actually be, but it looks like we’re not there yet! Why we were wowed: Stunning 61MP resolution in a portable, affordable all-purpose camera.

Olympus has stuck with its Micro Four Thirds format through thick and thin. Critics complain the sensor area is half the size of APS-C and this must impact the image quality – but it doesn’t, unless you start pushing the ISO. The point of the MFT format is that both the cameras AND THE LENSES are smaller and lighter, and the point of the E-M5 Mark III is that Olympus has refined and developed the handling, the stabilization, the capture speeds, the long/composite exposure modes and more, to produce a mirrorless camera with immense power, finesse, performance… and charm. Why we were wowed: The E-M5 III is a beautiful blend of compactness, power and performance.

When Nikon launced the Z 6 and Z 7 we were impressed by brand new cameras that were immediately ‘right’, and Nikon did it again with the Z 50. It’s small, but big enough for a proper grip and proper controls. It only has two native lenses right now, but one of these is a brilliant mechanically retracting 16-50mm pancake lens. Why can’t all kit zooms be this small? But by using its new Z mount, Nikon made all the existing Z lenses compatible too, along with all current Nikon DSLR lenses, via the FTZ adaptor. The best thing, though, is the value for money – especially the twin-lens kit. Why we were wowed: The Z 50 is compact, affordable, useable and just exactly ‘right’.

GoPro’s previous 360 camera, the Fusion, was quickly undermined by slick gadgets like the Insta360 One X, but now GoPro is back and firing on all cylinders. The GoPro Max makes 360 imaging simple, bringing a step forward in image quality and audio capture and doubling up as a vlogging camera and action cam too. Why we were wowed: GoPro is back at the forefront of 360, the next big thing?

Of course the Leica SL2 is expensive. It cost substantially more even than the Panasonic S1R, which is where it gets many of its internals. But this camera epitomises two things: Leica’s attention to physical design not cost savings, and its attention to the camera interface and the whole user experiece. It’s a great camera to use, and practical for serious amateur/pro use too, but what left us stunned was just how good a control system and user interface could be. Why we were wowed: The Leica SL2’s controls and interface show the rest how it should be done!