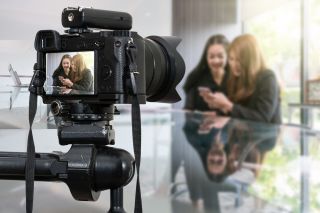 It might not look much of a mystery. The best camera phones already shoot 4K, as do many of the best point and shoot cameras. But these are fixed lens devices with small sensors, which limits their versatility and performance. There are many nuances to capturing great quality video beyond simple resolution, and this requires features and controls you will only get on cameras designed for serious 4K filmmaking.

The other point is that there are many different types of videographer now, from stills photographers who are moving into video, through vloggers and YouTubers through to professional filmmakers.

If you're an enthusiast or pro photographer with clients who now want video as well as stills, you'll need a camera that can do both, and the latest pro DSLRs and mirrorless cameras are perfect for the job.

We have a whole guide on the best cameras for vlogging, but we've also picked out a couple of great 4K vlogging cameras to include in this list.

There are other ways to shoot 4K video, of course! We look at the best action cameras and the best camcorder categories separately.

So here we’ve gathered together ten of the best 4K cameras for filmmaking across a range of price points, starting off with hybrid stills/video cameras for photographers who work in both areas, and with a special section for video-centric models to see what they do that’s different, and why many video pros will choose dedicated video cameras.

The Fujifilm X-T3 isn't just a great all-round mirrorless stills camera, it's also a spectacularly effective camera for 4K video. Most rival cameras can capture 4K video up to a frame rate of 30p (normal speed), but the X-T3 can shoot 4K at up to 60p, for a smooth 2x slow motion effect. Not only that, it can also capture the slightly wider Cinema 4K format at the same speeds. There's more. Most 4K cameras capture 8-bit video internally to memory cards, but the X-T3 can capture higher-quality 10-bit video internally and, if you connect an external recorder, it can save video at a higher 4:2:2 colour sampling quality. To cap it all, the X-T3 comes with a high dynamic range F-Log mode as standard (missing or a paid extra on some cameras) and HLG (hybrid log gamma)  mode via a firmware update. The only thing missing is in-body stabilisation, but many videographers will use a tripod or a motion-smoothing gimbal anyway.

The Panasonic Lumix S1 may not have the headline-grabbing megapixel count of its S1R stablemate, but it's around 35 per cent less expensive, and is a great all-round performer for shooting both stills and video. In fact its video capabilities leave most of its rivals trailing in its wake, though to get 4:2:2 10-bit internal recording made possible by this camera, you have to pay extra for a 'software key'. While larger than the mirrorless competition, the S1 feels very solid and is built to last. Its controls take some getting used to, but the S1 offers a superb blend of direct and touch-control. Factor its huge dynamic range and great high ISO performance, along with stunning video features, and the S1 is a superb full-frame mirrorless camera for both stills and video.

It's Nikon's cheapest Z-mount camera, but it's the best for video

There are lots of reasons to love the Nikon Z 6. It has the same build qualtiy and controls as the more expensive Z 7, it can capture full-width oversampled 4K video and it's better at high ISO settings. And thanks to some aggressive recent pricing by Nikon, it's a whole lot cheaper. Stills photographers might prefer the extra resolution of the 45.7-megapixel Z 7, but for 4K video the Z 6 is clearly the better camera. Nikon's in-body image stabilisation is really effective, and if you connect an external recorder you can record high-quality 10-bit 4:2:2 footage – and Nikon also includes a high dynamic range F-Log mode for those who want the flexibility to carry out colour grading work later. The only things you don't get are 60p 4K capture (though it can do 1080 video at 120p) and a flip-around front-facing screen (it simply has a tilting mechanism).

It's a measure of how quickly 4K capture technology is advancing that the Sony A7 III should find itself half way down our list, as when  it was launched it was setting new standards for 4K capture amongst mirrorless cameras. But it's still the best A7 model for video all round, even including the video-centric A7S II, which was good for its time but now looks long overdue for a refresh. The A7 III is a great all-round camera for any photographer who wants to move up to full frame without spending a fortune, and who wants a good 4K video camera too. The A7 III tops out at 30fps but it uses the full sensor width with no crop factor to capture great quality 'oversampled' 4K footage, and comes with an S-Log mode for high dynamic range scenes and colour grading later on.

When it comes to cameras with 4K video, Olympus has not built quite the same reputation as that of other Micro Four Thirds camera maker Panasonic, but its OM-D E-M1 Mark II still offers some powerful video tools for stills shooters. It can shoot both 4K UHD (3840x2160) and Cinema 4K video (4096x2160) at 30 or 24fps, and with a maximum bitrate of 237Mbps, which is pretty good for a consumer-orientated crossover camera and the best 4K camera in the Olympus range (we've yet to give the 4K video in the E-M1X a full test). It also benefits from Olympus’s 5-axis in-body stabilisation system, which works alongside the optical stabilisation in certain newer Olympus lenses. The M.ZUIKO Digital ED 12-100mm 1:4.0 IS PRO is the perfect parter for this camera, combining an effective 24-200mm focal range with a constant f/4 maximum aperture and its own in-built stabilisation to provide a combined stabilising effect of up to 6.5 stops. The Olympus captures crisp, clear and natural-looking video with only slight rolling shutter effects, but it’s harder to get cinematic depth of field with the smaller Micro Four Thirds sensor size.

Perfect for vloggers, the A6400 is also a handy all-round camera

On the surface, the Sony A6400 is just another variant in Sony's long-running A6000-series of cameras that first appeared in 2014, but with the company's latest high-tech AF system and a flip-over screen for selfies. But while these features might leave regular stills photographers unmoved, they are great news for videographers – especially vloggers – which is why we've included this camera in our list. Flip-over screens used to be considered a gimmick  for selfie fans, but they're really useful for vloggers who need to film a piece to camera.  The same goes for Sony's latest eye AF and eye AF tracking capabilities, because when you're in front of the camera rather than behind it, you need to be sure it's going to keep you in focus. The A6400 is not the cheapest 4K vlogging camera, but it is very effective and it's a pretty decent stills camera too, especially for action subjects.

Design for both stills photography and vlogging, the G90/G95 is versatile

The Panasonic Lumix G90 (G95 in the US) is a great stills and video camera for enthusiasts and vloggers. It's true that the Micro Four Thirds sensor is smaller than the APS-C sensors in some rival mirrorless cameras, but this doesn't seem to harm its performance. The handling and control layout are great, and the autofocus feels very snappy indeed. Panasonic is keen to push this model as a perfect hybrid stills/video camera that's also affordable, the only issue we'd have is with the price. It's a good camera but it's not cheap.

An extraordinary portable 4K camera from a cinema specialist

The Blackmagic Pocket Cinema Camera  4K is a long way down our list, but that's not because it's no good – it's because it's a unique and specialised camera than needs a bit of thinking about. It's styled like a compact rangefinder camera, but it's designed solely for video,  not stills. It uses a Micro Four Thirds sensor and lens mount, so there's no shortage of lenses to choose from, but it's an 8.8MP sensor made specifically for native Cinema 4K resolution. The Blackmagic does have autofocus, but not continuous AF – but it can capture 4K video at 60fps, and it can even capture raw video for high-quality grading/editing later. It's also no more expensive than, say, the Sony A6400. The Blackmagic Pocket Cinema 4K camera looks ideal as a second, pocket-sized camera for a videographer, but video is all it does – this is not a stills camera.

A brilliant camera for 4K video – not so much for stills

Panasonic has made 4K crossover cameras its speciality, but with the GH5S it’s gone a step further, sacrificing outright resolution for high-end video features. The 10MP sensor dents its appeal for stills photography, but it's ideal for 4K, especially as this is a Multi Aspect sensor. This allows it to shoot in both the 17:9 Cinema 4K and 16:9 4K UHD aspect ratios, in addition to regular 3:2 and 4:3 stills ratios, without the focal length changing as you alternate between these. Uniquely amongst crossover cameras, it can capture 4:2:2 10-bit video internally to suitably fast SD cards. The GH5S also comes with Panasonic’s V-logL log mode pre-installed for extra dynamic range, and while most rivals have a maximum 30min recording time, the GH5S supports unlimited recording (up to the capacity of the memory cards used). Performance is first rate, capturing great clarity, contrast and colour straight out of the box. It's more limited for stills photography than many of its rivals, but one of the best 4K cameras for filmmakers. If you need high-quality stills capability too, get the GH5, which shoots 20MP stills and is almost as good as the GH5S (but not quite) for 4K video.

A great 4K camera, but you’ll really need to raise your game

10-bit internal recording
Built in ND filters
Video only, not for stills
Expensive and complex

The C300 Mark II is in the middlemost model in Canon’s Cinema EOS range, and while it’s substantially more expensive than any of the DSLR/mirrorless crossover 4K cameras in this group test, it goes a whole lot further towards meeting the needs of professional videographers, with a modular design better suited to attaching external monitors, grips, rigs and sound equipment and for professional videographers this may make it the best camera for filmmaking, despite its size and cost. It uses a Super 35mm CMOS sensor similar in size to APS-C and corresponding to the old 35mm movie format. The 8MP sensor captures 4K video directly without cropping, pixel binning and oversampling, and it can capture 4:2:2 10-bit footage internally to twin CFast memory cards. It can also capture raw 4K to an external recorder. The built-in ND filters are a major asset outdoors, and there was no visible rolling shutter effect at all in our panning tests. However, while this is one of the best 4K cameras for experts, its price, ponderous handling and complex controls make it too much of a handful for amateurs.