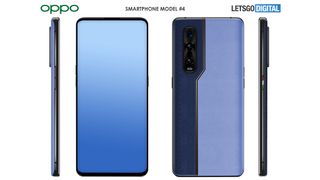 We've recently heard reports that Oppo are working on an Oppo Find X2 Pro limited edition camera phone in collaboration with Lamborghini. The Oppo Find X 2 Pro is an advanced camera phone with a 48MP camera and 10x Hybrid Zoom functionality. However, with the launch of limited edition with Lamborghini on the horizon, it seems that Oppo could be pulling something particularly exciting out of the bag…

There have been rumors that Oppo's limited edition camera phone will include an under-screen front-facing camera. This isn't a particularly new idea, as there have been prototypes and patents that have explored the idea of under-screen cameras as a solution to having to break up a screen with a notch or pinhole.

However, we haven't seen this technology hit the market yet. Oppo partnered with Xiaomi in 2019 to produce a prototype featuring an under-screen camera, but the phone never came to market as the camera struggled to get enough light through the screen. However, since this prototype was shown, there have been plenty of rumblings regarding under-screen cameras, with rumors that Huawei are experimenting on their own version as well.

The reason some think that the limited edition Oppo Find X2 Pro will have an under-screen selfie camera is due to patents filed by Oppo and released on 7 July, 2020 (via Let's Go Digital). Not only does this documentation show a duo-tone design that possibly points to a collaboration with Lamborghini, it also shows that the front of the phone doesn't have a notch or pinhole where the selfie camera would usually sit.

The idea of a camera phone without a front-facing camera in 2020 is fairly ludicrous, so we wouldn't be surprised to see this limited edition of the Oppo Find X2 Pro as the first commercial camera phone with an under-screen camera.

Unfortunately, this is all speculation based on some released patents. It's not certain whether the Find X2 Pro has an under-screen camera – and if it does, Oppo might not even release it. However, with Oppo's long history of experimenting with under-screen cameras, this might just be the model that makes it to market.