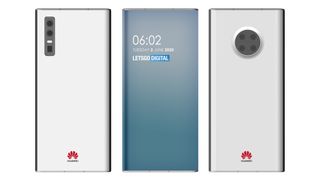 It's recently been revealed that Huawei has been working on a camera phone with an under-screen camera, which would erase the need for the traditional punch-hole notch on the selfie screen that most camera phones use. Huawei is far from the only manufacturer that's working on this exciting concept, as the concept of under-screen cameras has been explored by other manufacturers as well.

In June 2019 Chinese camera phone manufacturers Xiaomi and Oppo displayed a prototype phone with a selfie camera incorporated under the screen. Unfortunately, this prototype wasn't quite good enough to be put into production, as the under-screen camera didn't let enough light in.

However, since this initial prototype, there have been a variety of manufacturers who have tried their hand at under-display cameras. Huawei's offering seems to consist of a rimless camera phone with a highly rounded display and no physical buttons on the device, except for an on/ off button placed at the top.

This latest news comes from two patent applications that were recently approved, via Let's Go Digital. These patents were filed in October 2019, but were only published on 2 June 2020. These patents each have seven product images of the same unannounced Huawei camera phone, with the only notable difference being the rear camera unit. One of the patents show a typical vertical bar, while the other has a more interesting circular camera unit.

While a commercially-released camera phone with an under-screen camera is yet to hit the market, it's clear that it's truly captured the imagination of plenty of smartphone manufacturers. It seems that we'll definitely see a phone with an under-display camera soon – the only question is when and who.