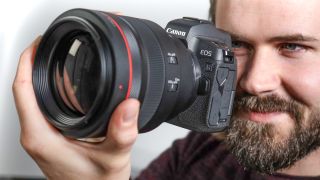 It’s almost as if camera and lens designers somehow got split into two separately-evolving species somewhere around the year 2010 (a date we plucked from the air).

But then lens designers have gone a different way, producing the best and most powerful lenses possible, regardless of size. This worked pretty well for dinosaurs (though we know what happened to the dinosaurs).

Doesn’t it feel like they ought to be? Mirrorless camera makers make a big song and dance about how much smaller and lighter mirrorless cameras are than DSLRs, but that does not apply to their lenses.

There are exceptions. There are some neat and compact ‘pancake’ or power-zoom or retracting kit lenses for some mirrorless cameras, and some nice compact prime lenses from camera makers and third party lens companies.

But the minute you get into professional constant-aperture lenses, which is what we all aspire to, all of that goes out of the window. Professional lenses for mirrorless cameras are just as big, heavy and cumbersome as their DSLR equivalents.

We’re told by camera makers that mirrorless mounts allow bold new lens designs never possible before. True. But you can also add ‘bigger’ to that list of adjectives.

Nikon is the big winner in the mirrorless swap. Its almost comically long 24-70mm f2.8E AF-S ED VR DSLR lens is also the heaviest at over 1kg, while the Nikon Z 24-70mm f2.8 S mirrorless lens is 200g lighter and almost 30mm shorter. Nikon has really made the mirrorless mount work for both camera and (in this instance) lens size.

Of the rest, you would probably say the the mirrorless lenses were broadly lighter as a group, but not by much.

Again, the extraordinarily long Nikon 24-70mm f2.8E AF-S ED VR leads the pack with a design that undoubtedly had to be built for the rather narrow Nikon F lens mount – OK in its time, but a limiting factor for today’s more exotic lenses.

Apart from that, the mirrorless lenses as a group are actually longer than the DSLR lenses. If you combine that with the generally smaller and lighter mirrorless bodies, it’s not hard to see how the balance of the camera will shift forwards.

To cover a big sensor, you need a big lens. Optical science is pretty intransigent in that respect. You can make smaller lenses if you compromise on zoom range, maximum aperture, AF actuator speed and optical performance, but right now the camera buying public seems in no mood for compromise. We don’t want the smallest, we want the best.

If you want a small and portable camera system, you need to look at smaller and more portable formats. Olympus (and Panasonic) have had to put up with constant sneering over the years about the smaller dimensions of the MFT sensor (about half the area of APS-C), but the fact is that this does allow smaller lenses. These Micro Four Thirds cameras really do deliver on their promise of a smaller, lighter system in a way that APS-C and full frame cameras do not.

If you can’t make the lenses smaller, can you make the cameras bigger?

The problem with big lenses isn’t necessarily their size or weight on their own. It’s the imbalance between a small mirrorless body and a big professional lens that’s the problem.

Even a lens weighing a kilo, or even two kilos, isn’t necessarily a problem if you can get a good grip and good muscular leverage on the camera body.

A 24-70mm f/2.8 pro lens on a Nikon D850 body doesn’t feel so bad because the D850 is a pretty hefty camera. But a 24-70mm f/2.8 pro lens on a Sony A7R IV feels front-heavy and imbalanced (just an opinion – sorry, Sony). With a heavy camera-lens combination, you need a good grip area and good leverage with your hands and fingers to take the weight properly, and with a small body/big lens combination you just don’t get it.

Paradoxically, if you have smaller hands, you sometimes need a bigger camera to spread the strain better through your fingers, wrists and forearms.