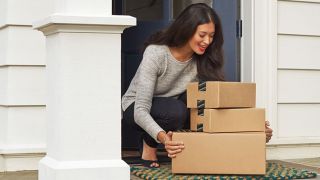 Amazon Prime Day 2019 is in full swing, and since it's been extended to a full 48 hours this year, it's been interesting to track the biggest selling items across the world.

More than 100 million products were sold at the same time last year according to Amazon, and this year looks like exceeding that, with consumers buying up a variety of items across their thousands of categories.

But what are people shelling out for so far? Here's what the world's buying in serious numbers during Amazon Prime Day...

Furbo Dog Camera - now $139
There's a tasty $114 saving off the list price of the Furbo Dog Camera right now. The Furbo lets you keep an eye on your pet wherever you are, and can even toss them a treat if they've been good, using the compatible app.
US deal ends: midnight 17 JulyView Deal

Echo (2nd Generation) - Smart speaker with Alexa and Dolby processing - Heather Gray or Sandstone Fabric - now just $49.99!
This is the lowest US price we've ever seen on the Echo (2nd gen). So if you've not invested yet, or you haven't made your mind up between the Dot and the Echo, now's your chance...
US deal ends: midnight 17 JulyView Deal

Duracell Plus Power Type AAA Alkaline Batteries, Pack of 18- save £7.30, now £7.99
Duracell Plus Power Type AA Alkaline Batteries, Pack of 18- save £7.30, now £7.99
Batteries! We all need them, and here's a great deal on 18 Duracell AAA or AA batteries in "Frustration Free Packaging". We don't know what that means, but if it's easier to get into them without cutting our hands to ribbons, we approve!
UK Lightning deal - ends 8pm 16 JulyView Deal

Fire HD 10 Kids Edition Tablet, 10.1" 1080p Full HD Display, 32 GB, Blue Kid-Proof Case - save $50, now $149.99
You'll get a $50 discount on Amazon's own HD 10 Kids Edition Tablet during Amazon Prime Day. With a chunky case to protect it during the inevitable falls and scrapes, and a healthy 32GB storage, it's a good choice for a youngster's tablet.
US deal ends: midnight 17 JulyView Deal

Nest Learning Thermostat, 3rd Generation save £60, now £159.99
Both the black and stainless steel colourways of this programmable thermostat have had £60 slashed off the retail price. Change the temperature and more from your smartphone, and save energy and lower your bills.
UK Lightning deal ends: midnight 16 JulyView Deal

ViewSonic VX2257 monitor, save $36, now $83
This ViewSonic VX2257 has a 22-inch display, and is full HD despite the knock-down price. We don't think monitor prices won't get cheaper than this for Amazon Prime Day...
US deal ends: midnight 17 JulyView Deal

Amazon device deals - huge US savings - up to 60% off selected products
You'll find fantastic savings on many of Amazon's range of devices for Amazon Prime Day. The standouts are big savings on the Echo Dot ($22), Fire tablets (from $29.99), Echo Show ($49.99) and Fire TV Stick ($14.99), but there's plenty of great deals for the Blink, Ring, and other ranges too. Head over the the product page now.View Deal

SanDisk Ultra 128GB microSDXC memory card  - £14.49
This one's flying out! Save 60% on this handy 128GB microSD card that is perfect for topping up the storage on your smartphone, action camera or dash cam. This A1 class card offers transfer speeds of up to 100MB/s and comes with an SD card adapter. (On the product page, click on View Offer to see the Deal Price)
UK deal – ends midnight 16 JulyView Deal

Ring Video Doorbell 2 | save £60 now £119
The cheapest Full HD video doorbell in the Ring range. You have the choice as to whether it is battery powered, or uses the existing ring wiring if your home has it. It comes with a choice of two facias, and is one of the unexpected hits of Amazon Prime Day.
UK deal – ends midnight 16 JulyView Deal

Samsung MZ-76E1T0B/EU 1 TB 860 EVO Sata III 64L V NAND Solid State Drive - was £263.54, now £132.90
Storage solutions were one of the biggest sellers of Amazon Prime Day last year, and this year seems no exception. You can currently get 50% off this 1Tb Samsung Solid State Drive, and plenty of people are...
UK deal – ends midnight 16 JulyView Deal

Microsoft Surface Pro 6 12.3": was £1029, now £749.99
This fantastic combination tablet/laptop has been reduced by £280, and is now a bargain at under £750 for Amazon Prime Day. It's a great choice for those who are after flexible computing on the go at this price.
UK deal – ends midnight 16 JulyView Deal

Echo Show 5 – Compact smart display with Alexa, Black - £49.99
Another of Amazon's Echo products is flying out of the door - this time the Alexa-controlled smart display that can be used to manage your home, watch movies, make video calls, and anything else you can ask Alexa to do via the 5.5" display. There's a healthy 38% off during Amazon Prime Day.
UK deal – ends midnight 16 JulyView Deal

Fitbit Charge 3 Advanced Fitness Tracker - Rose-Gold/Grey, One Size - £95.99
The Fitbit Charge 3 is proving a popular fitness tracker this Amazon Prime Day, thanks to a 26% discount. Swimproof and water resistant to 50m, it's got a 7 day battery life, and is a good choice for swim tracking. Available at the same price in graphite and berry colours.
UK deal – ends midnight 16 JulyView Deal

Samsung UE40NU7120 40-Inch 4K HDR TV: now £339
If you're in the market for a good size 4K TV at a bargain price, this Samsung fits the bill nicely. It's not so huge that it'll dominate your living room, but is Ultra HD certified and includes a 1 year manufacturer warranty.
UK deal – ends midnight 16 July
View Deal

Amazon Kindle Fire HD10 (32GB) - £94.99 (save £55)
Amazon Kindle Fire HD10 (32GB) - $99.99 (save $50)
A tablet is becoming a must-have accessory for any photographer... for research, to show others your portfolio or for a bit of light image editing when travelling. The Fire HD10 is our favorite budget tablet - but with this huge Prime Day discount it is a steal. Features a 10in Full HD screen and a built-in Alexa smart speaker.
UK and US deals – end midnight 16 JulyView Deal

PlayStation 4 Pro 1TB plus Spider-Man and Horizon: Zero Dawn games - now $299.99
This is a super-powerful PS4 games console, plus a pair of great games that'll keep you busy for months. This is the best price we've seen, but they're bound to run out soon, so be quick if you want a bargain.View Deal

Anker Soundcore Bluetooth Speaker - was $27.99, now $20.78
The Anker Soundcore was already a keenly-priced Bluetooth speaker with solid battery life and sound. Now, with a further saving in the US, this is a great choice for those after a super-budget sound system.
US deal – ends midnight 16 JulyView Deal

TP-Link Smart WiFi Plug - now £13.99
With 53% off the retail price, this smart WiFi plug is proving a popular deal. It works with any Wi-Fi router without the need for a separate hub or paid subscription service and can be scheduled to automatically power electronics on and off as needed. Works with Amazon Alexa (Echo and Echo Dot), Google Home and IFTTT. No hub required, control your devices from anywhere.
UK deal – ends midnight 16 JulyView Deal

AncestryDNA: Genetic Testing Ethnicity - save £35.60, now £53.40
Already one of the best-selling DNA tests on the market, this generous discount for Amazon Prime Day is bound to be popular. Able to trace your roots back to 500+ global regions, AncestryDNA lets you discover the rich details of your family story.
UK deal – ends midnight 16 JulyView Deal

Google Home Mini was $50 now $25 at Walmart
Not Amazon as such, but Google's smart-looking digital assistant and wifi speaker is slashed to half price at Walmart in the US. Get it to answer questions, play you music, control your smart home, and much more.View Deal