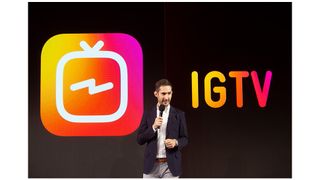 Well, that was fast.

Barely two weeks after we got wind that Instagram might be toying with hour-long videos, here they are. Sadly, not for you and your content though – this is all part of the new content delivery platform IGTV, which launches alongside the announcement that the Instagram community has officially reached the milestone of one billion people.

The app was launched yesterday at a glitzy event in San Francisco, and at this point it’s difficult to know exactly what to expect. The announcement does an impressive a job of spinning features that most users don’t like into positive selling points, though.

For instance, "Just like turning on the TV, IGTV starts playing as soon as you open the app," is a lot more words than "compulsory autoplaying video" despite it clearly being the same thing. Also, For You, Following, and Popular tabs are obviously the kind of algorithmic feeds that YouTube’s users and creators have been getting irritated with.

As you might expect, integration with Instagram is utterly seamless. If you follow someone on Instagram, you already follow their channel on IGTV, and they’ll be there the moment you boot up the app for the first time. The app also has the direct messaging feature for sharing videos and channels with friends, and a Continue Watching tab that allows you to pick up exactly where you left off.

Despite some grumbles about various features and tweaks to the algorithm – and, indeed, grumbles that the algorithm needs to exist at all – Instagram still boasts a robust community of photographers. It’ll be interesting to see how many follow the site to IGTV, and what kinds of resources for photographers appear on there.

IGTV is going to be rolling out globally on iOS and Android over the next few weeks. You can read the company's official announcement blog for more.