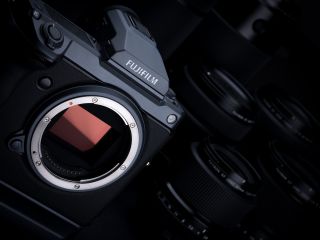 The Fujifilm GFX 100 has been hitting the headlines as a 100-megapixel medium format masterpiece, but it's not all good news. It turns out some examples have a shutter release locking switch that could work loose. It sounds minor, but it’s still an embarrassment in a camera costing $10,000/£10,000.

We didn't experience this problem when we were writing our GFX 100 review but Fujifilm has identified a fault with some models nonetheless. It says the defective part is the shutter release locking lever on the camera’s vertical grip. It needs to be fixed because it could lead to small parts becoming loose inside the camera body and interfering with its operation.

If you want to find out more there is an official GFX 100 service advisory notice on the Fujifilm website which lists the serial numbers of cameras that may be affected:

The GFX 100 production process has already been corrected, and some cameras with these serial numbers may have been fixed before sale anyway. But if your GFX 100 has a serial number in this list, you should contact your nearest Fujifilm support or service centre.

Is this GFX 100 fault serious?

It’s not uncommon for new products to suffer from teething problems, but this one ranks pretty low on the scale (unlike Nikon’s D600 sensor oil-spatter issues, for example). It’s unlikely to affect the GFX 100’s sales or reputation as one of the best cameras for professionals, as it’s just a minor production defect rather than a serious (and expensive) design flaw.

The fact is that the GFX 100 is such a ground-breaking product that it would take more than this to damage its reputation. $10,000/£10,000 sounds a lot to pay for a camera, but offers the specifications of high-end studio cameras costing three to four times more, and in a body not much larger than a pro DSLR.

The GFX 100's 100-megapixel sensor makes it one of the highest resolution cameras you can buy and with its nearest rivals costing 3-4 times more, we think it's also the best medium format camera right now, pound for pound.

You can find out why we like this camera so much in our Fujifilm GFX 100 review.

• These are some of the best cameras for professionals right now
• Discover the 10 highest resolution cameras available today
• Need to step up from full frame? These are the best medium format cameras