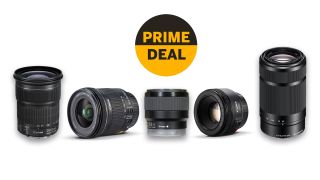 With all the great Amazon savings right now, there's no better time to justify grabbing a new piece of glass for your (probably similarly new) camera. With so many deals going on, though, it's easy to get lost in a Prime Day labyrinth trying to find the tastiest offers.

Don't worry – we've rolled up our sleeves and dug out the five best Amazon Prime Day lens deals for you. Whether you're looking for a superwide zoom, a telephoto lens or a good old nifty fifty, these are the hottest savings you'll find right now…

Canon EF 50mm f/1.4 USM prime: was £339, now just £254
This is one of the most popular prime lenses for the Canon EOS DSLRs – and particularly loved by portrait photographers. The wide f/1.4 maximum aperture allows you to create artistically blurred backgrounds, and this lens is as comfortable when used in manual focus mode as in autofocus. With an £85 saving, it is a Prime Day bargain.
UK deal – ends midnight 16 JulyView Deal

Sony FE 50mm f/1.8 standard prime: was £169, now just £135
This is a great fast-apertured lens for use with any of Sony's E-mount mirrorless cameras, including popular models such as the full frame A7 series, to the APS-C A6000 series. The f/1.8 maximum aperture make this great for lowlight shooting - but comes into its own for portraiture, allowing you to create blurred 'bokeh' backgrounds without spending a fortune (and you save £34 during Prime Day).
UK deal – ends midnight 16 JulyView Deal

Canon EF-S 10-18mm superwide zoom: was £239, now just £179
A great second zoom for those using Canon DSLRs from the EOS 4000D through to the EOS 7D Mark II. The super-wideangle focal length range of this Canon EF-S 10-18mm f/4.5-5.6 IS STM lens is a perfect partner for the 18-55mm zoom that is usually supplied with these APS-C format cameras.
UK deal – ends midnight 16 JulyView Deal

Not an Amazon Prime member? Sign-up for a free 30-day trial to take advantage of these offers!

SanDisk Extreme Pro 64GB SDXC memory card  - £14.69
Looking for more cards for your DSLR, mirrorless camera or camcorder... then you need some of these. Amazon has knocked 39% off (or over £9)  this respected line of UHS-I cards. It has an impressive max speed of 170MB/s and a V30 video classification, so great for shooting sport, wildlife, weddings and 4K video.
UK deal – ends midnight 16 JulyView Deal

Amazon Kindle Fire HD10 (32GB) - £94.99 (save £55)
A tablet is becoming a must-have accessory for any photographer... for research, to show others your portfolio or for a bit of light image editing when travelling. The Fire HD10 is our favourite budget tablet - but with this huge Prime Day discount it is a steal. Features a 10in Full HD screen and a built-in Alexa smart speaker.
UK deal – ends midnight 16 JulyView Deal

Insta360 EVO: was £419.99, now £335.99 @ Amazon UK
This is our top-rated 360 action camera at the moment. It is capable either 180-degree 3D imaging or regular 2D 360 video and stills, via a unique folding design that lets you clip its cameras back-to back (360) or lock them into a side-by side position (3D). Its square design makes it straightforward to mount as an action cam and gives its unique dual role.
UK deal – ends at midnight on 16 JulyView Deal

The best Amazon Prime Day camera deals: everything you need to know
The best 50mm lens in 2019: Which 'standard prime' is the right one for you?
Three prime lenses every portrait photographer needs to consider