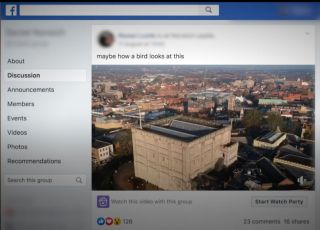 In news that will likely make experienced drone pilots give a collective groan, an amateur drone operator has been "given words of advice" by the police after he illegally flew his drone near a city centre… and then uploaded the video onto social media.

The video, which was shared in a Facebook group with over 30,000 members, shows the drone flying too close to Norwich Castle. This breaks the Civil Aviation Authority guidelines that state that people flying drones for fun should operate no closer than 150m from any area that's used for residential, commercial, industrial or recreational purposes.

Talking to the BBC, PC Thomas Munday of Norfolk Police said, "After being made aware of this illegal flight in Norwich, officers investigated and identified the operator who has since been spoken to. Due to the circumstances, we judged no formal action was required."

While this is purely speculation, it sounds as if the drone pilot was simply unaware of the law surrounding flying drones near a city. With legislation changing so frequently as lawmakers race to catch up with the quickly-developing technology, it's more important than ever for drone users to keep themselves up-to-date on the law.

New legislation due to be introduced on 30 November will require operators to register if their drone weighs more than 250g and up to 20kg. Additionally, drone pilots wishing to fly outdoors will need to take and pass an online competency test every three years.

If you'd like to update yourself on the latest legislation, you can refresh your knowledge at the Drone Safe website.

And failing that, if you do happen to be in possession of illegal drone footage, we would suggest it's perhaps best not to upload it onto Facebook…

DJI pushes back new camera drones to 2020 to conform to safety regulations?
Best DJI drones in 2019
Best drones for beginners in 2019