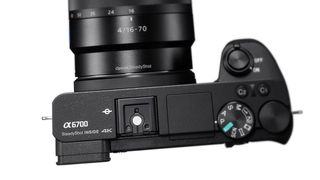 Our mock-up of what the A6700 may look like (Image credit: Future)

As we speculate about the long-awaited arrival of a new entry-level Sony APS-C mirrorless camera to replace the ageing A6000 - we've christened it the Sony A7000 - camera rumors have surfaced that Sony may well have a A6000 successor waiting in the wings, albeit not with the model number you might expect.

Sony Alpha Rumors reports that we may well see not one, but two new APS-C Sony MILC cameras at the end of August, namely the A6200 and A6700. Apparently the source of this Sony camera rumor has previously been right with previous A6400 speculation, so there could be some credibility here.

If correct, the A6200 would be positioned below the A6400 in terms of specs, performance, and presumably price. Whether the new camera would oust the old A6000 to become the lowest rung on the A6x00 ladder is still unknown, but knowing Sony's track record, we'd speculate that the venerable A6000 may well live on, possibly receiving yet another price cut.

The rumored A6700 is even more enticing. With the current flagship Sony APS-C mirrorless, the A6500, now three years old, and in some respects outshone by its lesser sibling, the A6400, the time is right for Sony to come out guns blazing and launch a clearly superior halo product for its APS-C line-up.

A boost in sensor resolution would be a good place to start, with the A6500 and A6400 still packing 24.2MP Exmor CMOS sensors. This is now starting to look somewhat limiting next to the ever-increasing sensor resolution in Sony's a7R full-frame mirrorless series. Alternatively, an increased maximum sensor sensitivity could be on the cards, as in this respect the a6400 confusingly manages a higher max sensitivity of ISO 102,400 to the ISO 52,200 of the a6500, despite both cameras using the same sensor, and the a6500 supposedly being the more advanced model.

Of course, all this is mostly speculation, but this isn't the first time we've heard chatter about possible specs for a new entry-level Sony APS-C camera. Back in January, Sony Alpha Rumors posted the specs below that hint at the kind of performance an A6000 replacement could offer:

• These are the best mirrorless cameras right now
• Which is the best Sony camera?
• The best cameras for vlogging: we reveal our top picks