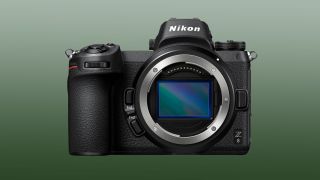 Our mock-up of the Nikon Z8 (Image credit: Nikon)

It could be said that perhaps the release of the Nikon D6 wasn't quite as exciting as Nikon fans were hoping for, but maybe they can take heart in the latest Nikon rumors to hit the internet. Apparently, both the Nikon Z8 and the Nikon D880 (our moniker for the Nikon D850 replacement) will be using the same Sony 60MP CMOS sensor.

With both the Nikon D850 and the Nikon Z7 sitting pretty with a 45.7MP sensor, this will be a significant upgrade to both camera systems and will likely please those photographers always looking for more megapixel power.

As reported by Nikon Rumors, not only is the Nikon Z8 expected to have a beefy 60MP sensor, it'll also apparently have dual SD and CFexpress card slots. These two characteristics clearly mark it out as a camera designed for professionals – who will be glad that Nikon is finally gearing up to release a pro mirrorless body.

While the Nikon Z7 is undoubtedly a fantastic camera, the lack of dual card slots meant that it would always be a risk taking it on professional shoots, because if your card was lost or became corrupted before you could back it up, you would lose all of your photos. This is frustrating enough on a personal shoot, but if you've been paid for something that you can't deliver then you'll be in a very sticky situation.

In comparison, the Nikon D850 is a fantastic professional camera, being used by pro photographers all across the industry. A 60MP sensor in its follow-up would surely just be the cherry on top of the perfectly crafted cake.

Other tantalizing tidbits of information from Nikon Rumors include the rumor that there will be two more Nikon mirrorless cameras announced this year, and one of them should be a high-end professional body (we can only assume that this would be the Z8). The Nikon Z8 is also rumored to have a vertical grip option, a pro body and a higher price tag – although we're not shocked at that particular suggestion.

The last interesting insight is that the Nikon D850 replacement won't be seen in 2020, instead possibly appearing in 2021.

While it would have been nice to see a D850 follow-up this year, it looks as if Nikon will be keeping us busy regardless with their exciting mirrorless plans. Watch this space!