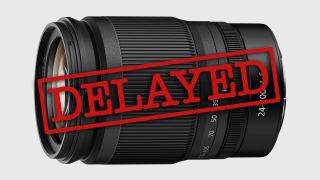 UPDATE: Retailers have updated their shipping dates for the Nikon Z 24-200mm f/4-6.3 VR, the delayed superzoom lens for Z-system cameras that was originally supposed to be released on 16 April.

All signs point towards the lens arriving at the end of June, with Amazon US listing a 30 June shipping date and Calumet Photographic in Germany stating that it will ship on 25 June. (It should be noted that Amazon had previously listed 14 May as the expected shipping date.)

The much anticipated lens had been scheduled for release on 16 April, but its launch has been indefinitely postponed "due to production reasons" – clearly another casualty of the manufacturing issues caused by current global events.

The announcement of the delay came from Nikon Japan, in a statement titled "Apology and announcement for postponing the launch of the Nikkor Z 24-200mm f / 4-6.3 VR". As was the case with the postponed release of the Nikon D6 (which did at least receive a new release date), a similar statement will no doubt follow in due course from other Nikon territories.

In addition to the 24-200mm lens and its latest flagship camera, the manufacturer also indefinitely delayed the Nikon 70-200mm f/2.8 Z lens in February. Unsurprisingly that was also due to production issues, with Nikon stating that, "We are currently making final adjustments as part of our production process in order to ensure the highest quality product."

Other high-profile camera products have likewise been affected by current issues, including the Fujifilm X-T4 being delayed – with Fujifilm Russia noting a potential accompanying price increase "due to the sharply increased volatility in the foreign exchange market."

No such price increase has been suggested for any of the delayed Nikon products, though of course anything is possible in the current economic climate. Nikon Japan's full statement, via machine translation, is below.

Thank you for using Nikon products.

For the Nikkor lens "Nikkor Z 24-200mm f / 4-6.3 VR" that we announced that it will be launched in April 2020, we decided to postpone the release date due to production reasons.

We sincerely apologize for any inconvenience caused to customers who are waiting for this product.

We kindly ask for your patience and understanding.