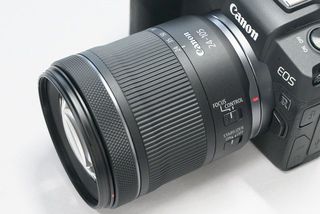 Images have leaked of the Canon RF 24-105mm f/3.5-5.6 IS STM – a new zoom lens for the manufacturer's full-frame mirrorless system, and an alternative to the existing L-series variant.

The the Canon RF 24-105mm f/3.5-5.6 IS STM is rumored to be announced in February – along with the Canon EOS 850D / Canon Rebel T8i, which has also just had fresh images leaked (both courtesy of Nokishita) – it seems likely that Canon will be unveiling a raft of new product at CP+ 2020, taking place in Japan from 27 February to 01 March.

While the RF 24-105mm f/4L is an impressive piece of glass (and has been the standard kit lens offered with the Canon EOS R), the criticism has always been that it's pricey – and that it's a bit too big and heavy for the smaller Canon EOS RP.

This is where the new RF 24-105mm f/3.5-5.6 IS STM seems poised to step in. While no official specs or measurements are available, it is clear from the leaked images that it is notably smaller. It omits the manual focus ring of the L lens, though as with all Canon RF glass it possesses the useful control ring at the nose.

While it doesn't retain the constant f/4 aperture, it is slightly faster at the wide end (f/3.5) and while it slows down (to f/5.6) at the telephoto end, the optic possesses image stabilization – which will help when using slower shutter speeds to compensate for the smaller aperture, and of course to keep things steady when shooting at 105mm.

One of the leaked images depicts the lens focusing at a ludicrously close distance, suggesting that it might also possess macro properties (similar to the Canon RF 35mm f/1.8 Macro IS STM).

Like the Canon RF 24-240mm f/4-6.3 IS USM before it, this looks set to be a great all-purpose lens that's a far better bet for the compact EOS RP, or for those "one lens" outings where you want to travel light. And if it performs even half as well, it will be doing well.