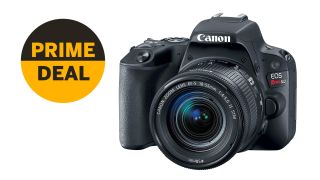 This is the deal we have been waiting to go live... and now it is here! There have been some great Amazon Prime Day camera deals so far. But this looks like one of the best offers anywhere on the US site, though, as the Canon EOS Rebel SL2 with 18-55mm lens is to have its price dropped by a massive $165, to take this DSLR kit down to a record-breaking low of just $384!

Canon EOS Rebel SL2 with 18-55mm lens: $384 @ Amazon
The Rebel SL2 is one of our favorite DSLRs for beginners. Canon has just added a newer SL3 model, but is keeping the SL2 going as a cheaper alternative – and this amazing 45% discount makes it almost too good to miss. You can buy the SL2 body only, but we recommend it with this EF-S 18-55mm STM lens as a kit.
US spotlight deal – ends midnight on Tuesday 16 JulyView Deal

Canon EOS Rebel SL2 with 18-55mm lens: save $165 now $384
This is the all-white version of the SL2 - the same price and combo, but with a finish that makes this very different from most people's SLRs
US spotlight deal – ends midnight on Tuesday 16 JulyView Deal

Canon EOS Rebel SL2 body only: save $135 now $314
The Prime Day deal also stretches to the body only option of the black Rebel DSLR - there is a very healthy $135 saving to be had here, if you don't want the kit lens.
US spotlight deal – ends midnight on Tuesday 16 JulyView Deal

Canon's pint-sized DSLR punches well above its weight. It's a great camera for those beginning their photographic journey, but it's also the perfect partner for travel photography – particularly with the 18-55mm STM lens, which is neat, fast to focus and delivers good performance.

Boasting a 24.2MP sensor and 1080p video recording, it also comes with Wi-Fi and Bluetooth built in. Photographers new to DSLR shooting will appreciate Canon’s guided shooting mode – it's so user-friendly that we think it's the best Canon camera for beginners… and we even rate it as one of the best cameras for kids.

SanDisk 256GB Extreme SDXC UHS-I Card -  save $12, now $47.99
High-capacity memory cards are expensive, fast memory cards are expensive too, and if you want both you've got the perfect storm! That makes this 20% discount on the SanDisk 256GB Extreme SDXC card a good deal. This card has the capacity to cope with the longest shooting sessions, and the V30 speed rating to handle 4K video capture.
US deal of the day – ends at midnight on 16 JulyView Deal

Rokinon 24mm F/1.4 for Canon: save 54% @ Amazon
Wide aperture prime lenses are usually expensive, but this Rokinon 24mm f/1.4 is already good value at its regular price, and at 54% off on Amazon Prime day, it's an amazing deal. It's for full-frame Canon DSLRs, but note this is a manual focus lens only (not autofocus).
US lightning deal – starts 07:45 ends 13:45 16 JulyView Deal

WD 6TB Elements external hard drive: save $100 $89.99
Sooner or later you'll need external storage to handle your ever-growing image library and video assets, as your computer's internal storage is limited. This WD 6TB hard drive gives you lots of extra space, and is an incredible deal – for one day only – at less than half price. You can also use it for all those backups you've been putting off!
US spotlight deal – ends at midnight on 16 JulyView Deal

We are used to Amazon cutting the price of its own devices on Prime Day itself, but this year the sale has started early with a half price deal on its most popular voice activated assistant - that will answer your questions, play you music, turn on its wifi radio, and much more if you just say the magic word "Alexa".View Deal

Insta360 EVO: was $419.99, now $335.99 @ Amazon
This amazing action cam offers either 180-degree 3D imaging or regular 2D 360 video and stills, via a unique folding design that lets you clip its cameras back-to back (360) or lock them into a side-by side position (3D). Its square design makes it straightforward to mount as an action cam and gives its unique dual role.
US deal – ends at midnight on 16 JulyView Deal

HP Sprocket 2-in1 | now $69.99  save $30
This looks like a great deal on this Sprocket 2-in-1 device - which combines all the benefits of an instant camera with that of a portable printer. Take digital images on the supplied microSD card, and then print out the ones that you like. Or beam images from smartphone to create hard copies. Prime members pay $69.99 on checkout.
US deal - ends midnight 16 JulyView Deal

Fujifilm instax Mini 9: save $20 now just $49
Fujifilm instax Mini 9: was £69.99, now just £44.99
One of the most popular instant cameras out there, and for good reason – this cute looking Instax is the perfect thing to take to parties, and produces credit card-sized snaps no matter where you are! Just don't forget to pick up some film…
UK & US deal – ends 8pm on 16 JulyView Deal

This is a nice looking pre-Prime deal from Amazon themselves. The Spark is a great introduction into the world of camera drones and aerial photography with a 12 megapixel 2-axis gimbal camera that can shoot 1080p HD video. Top speed of 31mph and a range of up to 1.2 miles. Comes with DJI's own remote controller.View Deal

40% off photobooks and prints at Mixbook
Mixbook is offering 40% off all its photobooks, photo enlargements, canvas prints, calendars, and more, with its site-wide discount code that runs until the end of Amazon's Prime Day sale. Apply the code DLSDAY19 and get 40% off your order - this discount increases to 50% if you spend over $150.
US deal – ends at midnight on 16 JulyView Deal

SanDisk Extreme 512 GB microSDXC Memory Card | save $64 now $135.99
You can bag a $64 saving on this 512Mb microDSXC card as part of Amazon Prime Day. Ideal for action cameras, drones and Android smartphones and tablets, this Sandisk card has up to 160Mb/s read and 90Mb/s write speeds.
US deal – ends midnight (PT) 16 JulyView Deal

Samsung Galaxy S10+ Black: save $300 @ Walmart $699
This is the 128GB Prism Black version of one of our favorite camera phones at the moment... this flagship phone has great photo credentials, to add it its smartphone skills. This Walmart Rollover offer comes with a full US warranty.
US deal – whilst stocks larsView Deal

Google Pixel 3 XL 128GB Not Pink: save 26% @ Amazon $639
It's one of the best camera phones you can get right now, and this model comes with the bigger XL screen and a massive 128GB memory. Google says it's not pink but we think it is – and it's a good pink! What we like even more is the 26% reduction, which makes for a massive saving on this flagship camera phone.
US spotlight deal – ends midnight 16 JulyView Deal

LaCie Rugged Mini 1TB Portable HDD: save $15 now $59.99
Portable hard drives are really useful for any photographer who needs to back up shots on the move. The LaCie Rugged Mini 1TB is a great camera bag companion, in its distinctive orange protective casing.
US Deal of the Day – ends at midnight on 16 JulyView Deal