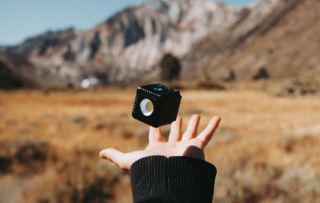 Lume Cube has today launched the Lume Cube 2.0. It’s been nearly a year since the California-based outfit announced the plucky little Lume Cube Air, but this latest addition to the portable LED family is a feature-rich, full-fat successor to the original.

According to Lume Cube, the 2.0 is “the smallest, most feature-packed, professional quality LED Light for photo and video on the market.” And indeed, crammed in the box you’ll find a Modification Frame, Softening Diffuser, Warming Gel and DSLR Camera Mount, none of which shipped with the original.

The device appears physically very similar to the Lume Cube 1.0. It has an aluminum body, stands at a diminutive 1.6 inches and weighs just 99g. It also features the same tripod thread, seven levels of strobe lighting and the same level of illuminance, but the similarities largely stop there.

The Lume Cube 2.0 boasts a 5,600K daylight-quality output and a very impressive 95+ color rendering index. It also touts an increased 80-degree beam angle and an improved lens, which is said to produce no hotspots for more even lighting.

The Lume Cube’s continuous LED light has always made it an ideal companion for filmmakers, but the 2.0 is most certainly optimized for photographers too. Astrophotographers will no doubt make use of the new low-light mode, and an optical sensor on top of the device cleverly enables it to be used as a slave flash.

All users will benefit from the little light’s vastly increased battery life, which is rated at up to 90 minutes at 100% brightness. And, as you’d expect from a 2019 release, the 2.0 is USB-C compatible. In fact, you can add yet another USB-A to USB-C charging cable to your collection, as you’ll find one in the box. A small but useful addition is the presence of a green LED, which flashes when fully charged, and the 2.0 is still able to operate when plugged in, making it ideal for home/studio use.

It’s worth noting that the Lume Cube 2.0 is only waterproof down to 30ft, which is much shallower than the 1.0’s ability to withstand depths of 100ft. However, 30ft will surely prove more than suitable for most users. Finally, Bluetooth compatibility enables the device to be controlled via the Lume-X app, just like its predecessor.

The Lume Cube 2.0 is available as a single unit for $89.95, as a dual pack for $175 and in a Professional Lighting Kit for $299 (featuring a pair of Cubes, light stand adapter, snoot, barn doors and carry case).