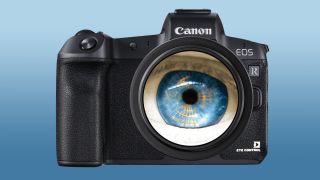 After a 20-year absence, Canon appears to be dusting off its love-it-or-hate-it Eye Controlled Focus system – a technology that skipped the digital age entirely, as the company hasn't employed it in any of its DSLRs.

Previously used in Canon's film cameras, the tech enables you to move your focus point simply by looking at it – the camera detects where your eye is looking and selects the point accordingly.

It was never made clear why the tech never translated to the digital era of SLR cameras, though some suggested that the sheer number of AF points could make finding precise focus more difficult.

Clearly that's not an issue, or not one that hasn't been overcome, as Canon has patented an updated eye controlled autofocus system for its mirrorless cameras – and the Canon EOS R famously has a staggering 5,655 AF positions.

The patent was spotted by Canon News, and describes an infrared LED working in conjunction with an algorithm that will no doubt be billed as having some sort of AI properties:

"The line-of-sight direction is detected by a predetermined algorithm, which will be described later, from the positional relationship between the eyeball imaged on the eyeball image sensor and the corneal reflection of the light sources".

Of course, as you might remember if you ever used the old Canon SLRs, the original system was pretty hit-or-miss; it either worked perfectly or it was a complete disaster, depending entirely on the user – which was likely the real reason it was never rolled out in the DSLR age.

So why is Canon retreading old ground now, two decades on? Well, new bullet points are obviously always needed to market new cameras. However, it may also be the case that modern detection technology has finally caught up with the original bright idea.

The patent identifies the objective, "To improve user convenience by automating a calibration operation of a gaze position while accurately recognizing a subject in a subject recognition device having a gaze detection function."

Indeed, Canon described the EOS-3's Eye Controlled Focus as being "almost twice as fast and more precise" – an AF system that moves at the speed of sight is certainly faster than using a joystick or tapping a touchscreen. In theory it's a game changer for amateurs and pros alike in both photography and cinematography…