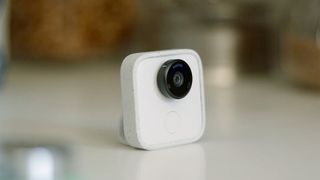 Wearable lifelogging cameras have had something of an ignominious history (remember the Autographer?), but if there’s any company with a chance of making one work, it’s Google. We shouldn't have too long to wait to find out how true that is either, as the company’s wearable Clips camera has now gone on sale at its official store.

Announced back in October, Google Clips is an intelligent wearable camera designed to automatically recognise and record interesting moments and compositions. Using its 12MP camera, it captures quick video clips at 15fps that can be reviewed in the bespoke Google Clips app, before being saved and shared.

Google teamed up with professional photographers and filmmakers in order to train the camera to better recognise what might constitute a “good” or “bad” image, feeding reams of imagery into its machine-learning model in order to train it not to bother with junk shots.

Google claims the camera will continue this mode of learning for users too, recognising faces of people who crop up frequently in its field of view over time, such as friends and family members.

In addition to its sophisticated auto modes, there's also a manual shutter button for when you want to take control yourself, and everything is recorded using a lens that has a130° angle of view. Clips are stored on 16GB of internal memory, while Wi-Fi and Bluetooth connection options are complemented by a USB-C port.

Read more: Google’s new AI can tell whether your photos are good or not

Google reckons the battery housed in Clips can handle up to 3 hours of smart shooting before needing a recharge. There are a few other interesting bells and whistles as well, notably 'lens occlusion detection', which sends a nudge to your smartphone if it detects that something is obstructing the lens – potentially very useful if you’ve left the camera alone to record something for an extended period of time.

Google Clips will be available for $249 in the US, and delivery is expected in late February to early March. In the meantime, you can sign up to the waiting list to be one of the first to get your hands on the new camera. Visit the Google store for more information