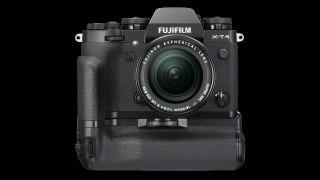 The previous model is barely over a year old, but rumors are already flying about the Fujifilm X-T4 – and, while they must be taken with the biggest pinch of salt that your fingers can manage, it is reported to be a 6K powerhouse that could rival the Panasonic S1H.

If the rumblings are true, the Fujifilm X-T4 will shoot 6K video at 60 frames per second with 10-bit internal recording and an anamorphic ratio. It will also possess in-body image stabilization, which will result in the body being approximately a third of an inch thicker and 140g heavier than the X-T3.

Fittingly, for a cinema camera, it will also feature a fully articulating touchscreen, and it will be released towards the end of 2020 – which certainly fits the X-T line’s biannual release cycle.

That’s all according to reports from Fuji Rumors and Fuji Addicts, both of which seem to originate from the former’s private Facebook group where a user claims to have learned the information from a reliable Fujifilm source. So, again, take the information with an according amount of salt – but we wouldn’t dismiss the whole thing out of hand.

The X-T3 was already one of the best 4K cameras, and with everything from the Panasonic S1H to the Blackmagic Pocket Coinema Camera 6K bringing 6K video to the masses (not to mention the apparently imminent Sharp 8K VIdeo Camera), it makes sense for Fujifilm to take the next big leap with the X-T4.

While Fujifilm bodies have typically shied away from in-body image stabilization, the company has stated previosuly that its engineers are working to make the system more compact – so the idea of integrating it into the X-T4 makes sense, and certainly gives the new camer another killer selling point.

We’re still about a year away from seeing what the Fujifilm X-T4 turns out to be, if these specs are anything to go by then we’re even more excited than we were before. Roll on the 6K revolution!

The best 4K camera for filmmaking in 2019, for photographers, vloggers, pros
Fujifilm X-T3 review
Mirrorless camera Black Friday deals in 2019: we bring you the best prices